You Are Here: RWTH's CLAIX is Germany's Fastest University Computer 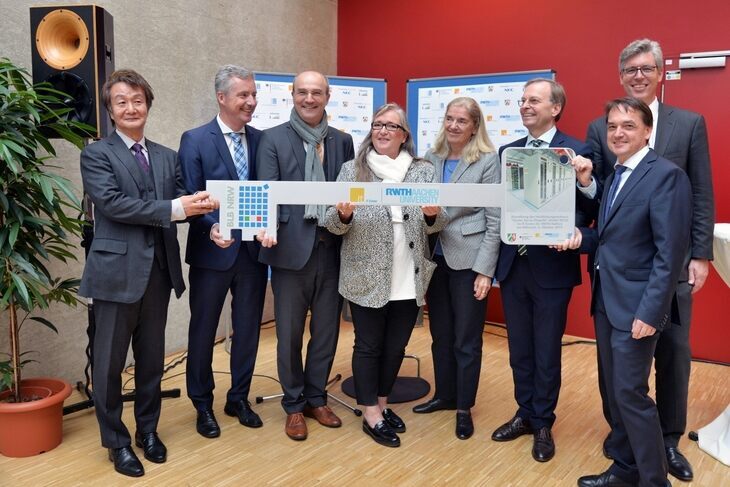 On Wednesday, October 2, 2019, RWTH officially inaugurated the "Cluster Aix-la-Chapelle" high-performance computer, CLAIX for short, during a small ceremony. The German federal government and the state of North Rhine-Westphalia have supported the installation of CLAIX with 22 million euros in funding.

With CLAIX-2018, located at RWTH’s IT Center, the University already received a top-class high-performance computer in November 2018. With its around 1,100 compute nodes, it provides a competitive edge for simulation applications and newly emerging application classes. Compared to the 2016 system, CLAIX-2018 achieved significant performance improvements in simulation applications, increasing the average pro-core performance by 30 percent for identical data sets. In 2019, 221 additional compute nodes, particularly suited for use in teaching and smaller-scale research projects, were added.

Each compute node is equipped with 48 cores and 192 gigabytes of random access memory. CLAIX-2018 delivers 2 petaFLOPS in the TOP500 benchmark. Furthermore, a new parallel file system for the storage and processing of very large datasets was put into operation, delivering a capacity of 10 petabytes in memory and a bandwidth of 150 gigabytes per second. For specific applications, such as the analysis of huge datasets or machine learning applications, 48 of the compute nodes are equipped with two NVIDIA Volta V100 GPUs, interconnected by the high-bandwidth, low-latency NVLink technology.

“We are very pleased that CLAIX, Germany's fastest university supercomputer, is located in North Rhine-Westphalia. The new computer, which is operated jointly with Forschungszentrum Jülich, provides an outstanding research infrastructure and will make a decisive contribution to further expanding the leading position of RWTH Aachen University and Forschungszentrum Jülich in the fields of simulation, data analysis, and high-performance computing," said Isabel Pfeiffer-Poensgen, NRW Minister of Culture and Science.

The CLAIX high-performance computer is of central importance to the University. This large-scale research infrastructure for simulations and data science will be instrumental in further developing our profile areas, and it strengthens the collaboration between Forschungszentrum Jülich and RWTH. It will be of particular benefit to one of our key research areas, modeling and simulation with high-performance computers.

An innovative, environmentally friendly direct water cooling system with a total cooling capacity of 2,400 KW ensures that heat from the computer is dissipated. The technology makes it possible to reduce the air cooling capacity in the server room by around 90 percent. "In this way we have created an important infrastructure for top-class research projects and, at the same time, made an important contribution to climate protection – a great achievement on the part of everyone involved," said BLB Managing Director Marcus Hermes.

The project was jointly realized by RWTH Aachen University, its IT Center, and the Aachen branch of the NRW Construction and Real Estate Agency (BLB NRW). The federal government and the state of North Rhine-Westphalia have supported the installation of CLAIX with a total of 22 million euros.