Every two years the German Chemical Society, GDCh, awards the Adolf von Baeyer commemorative coin to scientists for their outstanding work in the field of organic chemistry. This year the coin was awarded to Professor Dr. rer. nat. Carsten Bolm from the RWTH Institute of Organic Chemistry for his "significant contributions to the asymmetrical catalysis with transition metals." 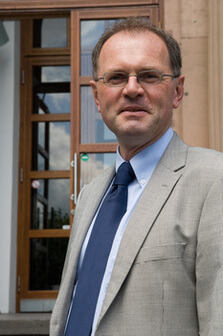 Carsten Bolm's primary work is catalysis research and the search for new reaction pathways for the targeted production of bioactive agents. Furthermore, he conducts research on the exploitation of lignin within the framework of the Excellence cluster "Tailor-Made Fuels from Biomass."

He has received multiple awards include the Otto Bayer Prize, the Otto Klung Prize, and the Heinz Maier Leibnitz Award. In 2014, he was among the Thomson Reuters Highly Cited Researchers; at the beginning of 2015 he was named a fellow of the British Royal Society of Chemistry. Bolm is chair of the scientific advisory council of the Leibniz Institute for Organic Catalysis in Rostock.

In 1910, industrial chemist Carl Duisberg instituted endowed the Adolf von Baeyer commemorative coin to commemorate his teacher, Adolf von Baeyer. It has been awarded by the GDCh since 1949. Adolf von Baeyer was one of the most important chemists of his time. He received the Nobel Prize in 1905 for his work "Synthesis of Indigo and Triphenylmethane Dyes."