You Are Here: Baatar Battsengel

Currently, Baatar Battsengel, from Monogolia, is a chemistry professor at the German-Mongolian Institute for Resources and Technology, GMIT for short, in Ulaanbaatar. She completed her doctoral studies at the RWTH Institute of Macromolecular and Technical Chemistry from 1999 to 2002. 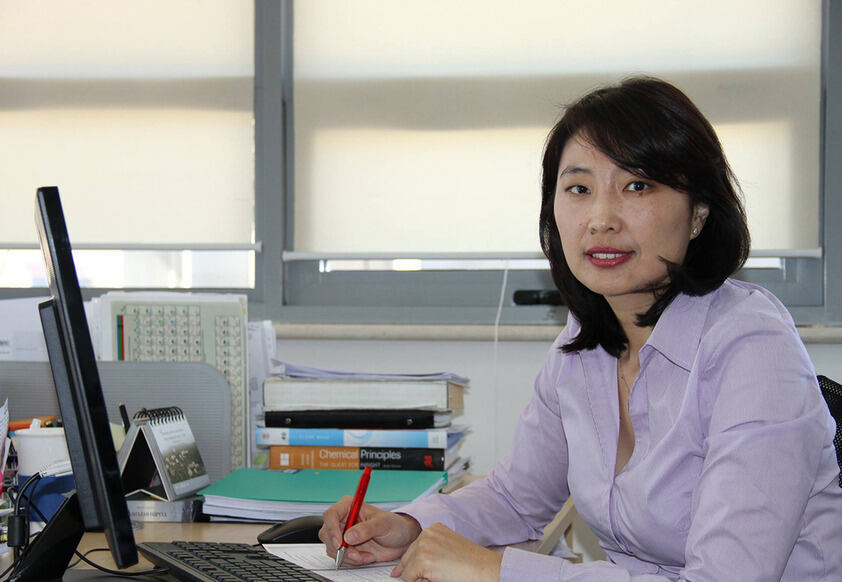 Copyright: © GMIT Baatar Battsengel was previously a RWTH doctoral candidate. Today, she collaborates with RWTH to establish the GMIT in her home country of Mongolia.

The establishment of the German-Mongolian Institute for Resources and Technology, GMIT for short, only took two years from the original idea and groundbreaking with a new campus to the first lecture. Such projects are seldom realized so quickly.

"Mongolia needed engineers," says the former RWTH doctoral candidate and research alumna and current chemistry professor at GMIT, explaining the reason for the German-Mongolian collaboration, particularly for the raw materials processing industry. Professor Baatar Battsengel, from the Monogolian capital Ulaanbaatar, talks about the background during her visit to Aachen. She doesn't just want to see her German alma mater and former Monogolian Student Association, MoSta, which she was a member of when it was founded in 2004. Primarily she has ambitious plans for the future. Carefully she retrieves the contract for these plans from her bag and shows it to us as important witness for a new future approved university partnership. The RWTH is to support the construction of a new university in her home country soon. Engineering education disappeared in Monogolia with the collapse of the Soviet Union 20 years ago. The unicum of German engineering training and education is a significant and crucial cornerstore to the 2011 raw materials agreement between Mongolia and Germany.

You're holding an agreement with signatures from the new rector of GMIT, Dr. Nyamjav Dorjderem, and the rector of RWTH, Professor Ernst Schmachtenberg. What does the agreement contain and confirm exactly?

It contains RWTH's partnership with the new Institute for Resources and Technology, GMIT, in Nalaikh near Ulaanbaatar. RWTH's primary role is to support the joint establishment of the GMIT with its German expertise in teaching and research. We aim to expand on the exchange of Mongolian students at RWTH, which has existed for over 20 years. I, myself, came to Aachen with a Mongolian government and DAAD scholarship for my doctoral studies from 1999 to 2002.

RWTH professors from the fields of raw materials, environmental, and mechanical engineering will be sent to GMIT. Aside from the Deutsche Gesellschaft für Internationale Zusammenarbeit, GIZ, and the German Academic Exchange Service DAAD, RWTH Aachen will provide support as a second partner university, alongside TU Freiburg, for the development of Bachelor's and Master's courses of study and the training of Monogolian teach staff to operate GMIT on their own.

After Chancellor Merkel and our President Elbegdorj signed the raw materials memorandum of understanding, a German and Monogolian team reviewed the best way to offer an education in engineering, whether it be in the form of a new faculty at the technical university or a new university, and if so, with which courses of study. An important realization was that hanging something on to the second-largest Mongolian university, the National University of Mongolia, NUM, would have been the wrong solution. The university structures, which orginated from the Soviet era, were too old. Only teaching took place at the university and research was conducted at an independent science academy. However, as we know from RWTH as an example, it is also possible to successfully conduct research at a university. The Monoglian universities had to change their structure for our plans. As a professor, I could only build labs for studies and research for students at a large university like NUM. However, I would like to move the education system in Monoglia more. In order to sustainably introduce the German standard of quality, which the Mongolians really value in the Germans, to the education programs, building a new independent university was a simpler solution.

You say "for us." How did you come to be part of the GMIT project setup?

As the assessment team for the feasibility study was formed in 2011, it also visited the national universities to speak with experts. When the team came to NUM, the rector brought us to the meeting and those to follow. I was a fan of the idea for an engineering university from the beginning. I had gotten my doctorate in Aachen and my doctoral supervisor, Professor Andreas Jess, is a chemical process engineer, but nevertheless an engineer! Thus, my education is also interesting and relevant to raw materials processing. As soon as a chemistry professor position became available at GMIT, I used the opportunity to fulfill my need to do more in Mongolia. I applied immediately – why not, I thought. Thankfully, I got it!

What do the concept and set up of GMIT look like? What will be different from the other national universities in Mongolia?

GMIT is to serve as a lighthouse for Monogolian higher education. This was the concept both from the German and the Mongolian side. The aid from the raw materials companies is also an important motor. Due to the state agreement "Bauen und Bildung" companies are required to support the Mongolian education system with their proceeds from the natural resources in our country. This has allowed to have a nice new campus, built by the largest ore mine owner, Oyu-Tolgoim, in a short amount of time. The GMIT could move directly into the recently finished space. The first Monogolian mathematics and physics professors, who also did their doctoral studies in Germany like me and had relevant research experiences in America, then realized our plans for the basic studies for professors.

Our administrative team has also grown within the year. Imagine, that with only two years of preparation, we already have 70 students in 2013. We will soon be expecting 100. With encouragement from the German side, we have decided to give an acceptance exam so that the quality is maintained and students have good enough English skills that they can understand the visiting professors from Germany in lectures. These are great ambitions of both the German and Monogolian partners.

Your involvement has outed you as fan of Germany. How did this come to be?

Why I love Germany is another, and certainly interesting, story. I was in sixth grade. Two men from the GDR visited my father. One of the men worked in media and had a book with him titled "Germany." It was about the GDR. He gave it to me and it had beautiful pictures of landscapes I immediately fell in love with. I had wanted to go to Germany ever since then. During the Wende it was possible to study in West Germany. During my Master's studies, I made every effort to learn German and then received the opportunity from the Ministry of Education to do my doctoral studies in Aachen at RWTH. That was in 1998. From that point on I spent a total of eight years in Germany, from 1999 to 2002 at RWTH, and then as a research assistant in Bayreuth, because doctoral supervisor moved there. I also had both of my children in Germany. In 2006 I returned to Mongolia as an associative professor of physical chemistry at the National University of Mongolia.

SInce then I have always tried to include my experiences and knowledge from Germany into my work, particularly to promote research at universities, for example in the form of two research labs and the publication of a collection of Master's and doctoral theses. I was often supported by Germany in my efforts. I would like to thank GIZ and the World University Service. I'd like to say thank you for all the opportunities to return to Germany and the important support in everday university life. For example, I can offer my students German- and English-language books at any time due to the materials program supported by the DAAD. As you know, my love for Germany also once started with a book.

The chemistry professor is currently teaching the first generation of chemistry Bachelor's students at the GMIT campus.

Baatar Baatsengel in the research lab with her assistant