You Are Here: Sabina Jeschke 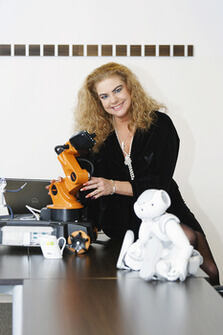 Interview with Univ.-Prof. Dr. rer. nat. Sabina Jeschke About Her Stay at the Hong Kong University of Science and Technology as part of the Theodore von Kármán Fellowship Program 2014

Sabina Jeschke, RWTH professor of mechanical engineering and director of the institute cluster IMA/ZLW & IfU, visited Hong Kong University in 2014, for a research stay via the Theodore von Kármán-Fellowship. She was the first outgoing female researcher funded by the program for interdisciplinary and worldwide RWTH research collaborations.

In her research alumni interview Sabina Jeschke explains the impact short stays at RWTH and abroad can have for worldwide networking in research.

Why did you decide to do an exchange with Hong Kong University through a Theodore von Kármán Fellowship?

Prof. Mitch Tseng from Hong Kong University of Science and Technology possesses comprehensive expertise of such systems, with a focus on production technology. I wanted to profit from his expertise. I am especially interested in the expansion of system boundaries: flexbility, adaptivity, and cognition of technical systems are important aspects of production, but also of logistics, mobility, and their cross-sections.

Additionally, I wanted to intensify the contact with Mitch Tsend and his doctoral candidates at HKUST – I had visited his lab once before for two days in December 2012 – in order to lay a solid foundation for future collaborations between RWTH and HKUST. HKUST has been near the top of rankings of important engineering universities worldwide for many years and was at the top of the famous Asia Ranking in 2013.

For the second time now, the Carologistics team from Aachen has become World Champion in the Logistics League, winning the RoboCup title in Hefei, China.

How important and meaningful were the funding and honor of the Theodore von Kármán-Fellowship for you and your work?

Through the exchange with Mitch Tseng and his doctoral candidates I was able to intensively focus on the development of new models for distributed intelligent systems. My research focuses on systems with decentralized control logic, that is bottom-up operated systems, where intensive communication between subsystems plays a big role. The concepts we worked out were very successfully applied in the field of mobile robotics here shortly after my stay in Hong Kong: Our team "Carologistics“ – together with my colleague Lakemeyer – and his team of autonomous transport robots was the champion of the Logistics League of the RoboCup 2014. We used the results to futher develop the algorithmics for this year's competition coming up.

What are your specific collaborative efforts?

The successful collaboration in the field of mobile robotics will be expanded. We plan to put together a transcontinental team, bewteen HKUST and RWTH, in order to compete with the NAO robots from the company Adebaran in the Standard Platform League of RoboCup, where humanoid robots play soccer. The research on this will offer potential for comprehensive collaborations, from joint Master's thesis and PhD supervision to research projects in other topic areas.

Second, I have been talking with our RWTH Vice-Rector for Business and Industry Relations, Professor Malte Brettel, about establishing an international Master's program with HKUST and a leading US university on the topic of entrepreneurship, which will be oriented towards the exisitng HKUST course of study "Technology Leadership and Entrepreneurship", designed by Mitch Tseng.

Can you recall a particular experience that impressed you during your stay abroad?

The HKUST campus is about a 30 minute drive from Hong Kong in the east with a bay on the sea and built in the middle of nature so that you can always enjoy the wonderful landscape no matter where you look essentially. The proximity to the other flora and fauna, compared to Germany, granted me a special experience. One day, a large green praying mantis waited for me in front of the lecture hall – posed in such a way as if it wanted to come to the lecture!

I was also impressed not only by the calm and thoughtfulness but also the involvement, passion, and nonviolence students displayed during the strike at the time. I also enjoyed the Hong Kong residents' enthusiasm for Halloween, a holiday I have enjoyed since my stays in the USA: funny and partially gigantic pumpkin decorations in the stores as far as the eye can see!

How useful and sustainable is the exhange with Hong Kong University through the Kármán-Fellow Program for your work, your institute, RWTH, and research and teaching in general?

Aside from the intensive scientific exchange with Mitch Tseng and his students, who gave me valuable input for my research work, the entire atmosphere at HKUST was very inspiring. Since it is a campus university, complete with student dorms, restaurants, and sports and shopping possibilities, where most of the students and even most of the professors and university personnel live, there is always something going on. As a result of the university's focus on the development of Hong Kong and its strong international orientation, a wonderful cultural diversity exists, from which students and teachers profit.

Is there also interest from Hong Kong University – from professors, students, and doctoral candidates – to do an exchange at RWTH? How is this viewed atRWTH? How is the German university landscape perceived generally?

During my stay I met and spoke with important individuals at the strategic level including the president, vice-president, provost, and others as well as with private audiences. And yes, there is great interest in an exchange with RWTH. At my colleagues' level as well; RWTH is known for its strong performance.

Aachen remains relatively unknown among students, as they typically orient themselves towards English-speaking universities – not necessary Ango-Saxon or American ones, as universities in Sweden are just as interesting. However classes in English are conditio sine qua non.

The students are very open, even to new languages, and they are ready to learn them. But the expect that language barrier to be as small as possible when they begin courses so that they can successful when they go abroad. Typically, they can only achieve this in English in addition to their mother language, either Cantonese or Mandarin.

What are your hopes for the future with regards to your research and international networking (among universities)?

I personally would like a clear internationalization strategie in the form of a consistent offering of English courses. This does not mean that all courses have to be offered in English. The motivation for learning German might be too small then. Little or no German skills are at a disadvantage at the latest when a foreign student decides to stay. Due to demographic change, we have enough reason to want strong international students to stay in Germany after graduation. German can no longer be a barrier to entry. Bachelor and Master's programs must be possible without German skills.

One approach could be that not all specialization areas can be selected in English. At least one or two must be available in English so that the course of study is "open" basically. Parallel to studying, it could be possible to acquire German skills during the first two years. That's more or less what I would like. The hurdle needs to removed. Otherwise I would prefer students from other places besides Germany and RWTH, which I was peronally extraordinarily regret. I have to think back to my NASA times: it's just a lot of fun to work in a highly international environment and profit from cultural differences.

My deepest thanks to RWTH, the organizers and designers of the Theodore-von-Kármán-Fellowship Program, as they enabled me to have rich experiences in many ways. The program's good organization made the application, grant, and settlement process uncomplicated. I recommend it to anyone. Thank you.

Robots on a playing field