You Are Here: Fire Protection Is His Passion

Fire Protection Is His Passion 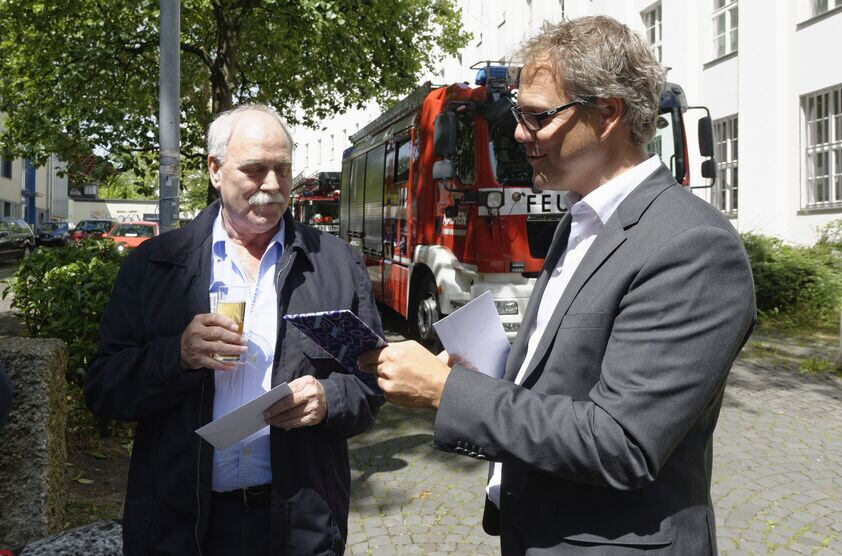 When Heinz Hellberg was a small boy, it was not his biggest desire to become a firefighter. At the Fire Protection Officer’s retirement reception, however, a big red fire engine was on display, providing an adequate backdrop for the official farewell ceremony led by the University’s Deputy Chancellor Thomas Trännapp. Present at the reception were colleagues from the Fire Department, the Volunteer Fire Brigade, and of course his co-workers from RWTH Aachen.

This year saw the Fire Protection Officer’s 65th birthday, and so his last working day was drawing near. As he is physically fit and full of passion for the profession, it is not easy for Heinz Hellberg to retire from his job. He has been working for RWTH Aachen since 1986, first as a facility manager, and since 1992 as an employee in the Health and Safety division. In 2004, he became the University’s Fire Protection Officer; in 2014, he was appointed head of the Fire and Object Protection subdivision.

“Bidding farewell to this colleague marks the end of an era,” said Dr. Heike Wolf, Head of the Division of Safety and Environment. According to Wolf, the job as a firefighter is highly demanding and also stressful, and practitioners must risk their lives for the protection of others. Emergencies happen at all hours of the day and night, and those who fight fires must be ready to work at any time and for long periods without rest. “Heinz Hellberg was a fire fighter through and through here at RWTH. In case of a fire, he himself was at the site of emergency, seeking to extinguish the fire as soon as possible.”

Heinz Hellberg and his professional attitude was recognized and respected by his colleagues from the Fire Department and the Voluntary Fire Brigade, many of whom came for a surprise visit at his last working day before retirement.