You Are Here: "Love at Second Sight"

RWTH researchers report in the professional journal "Science“ about the potential of carbon dioxide and hydrogen in chemical synthesis. 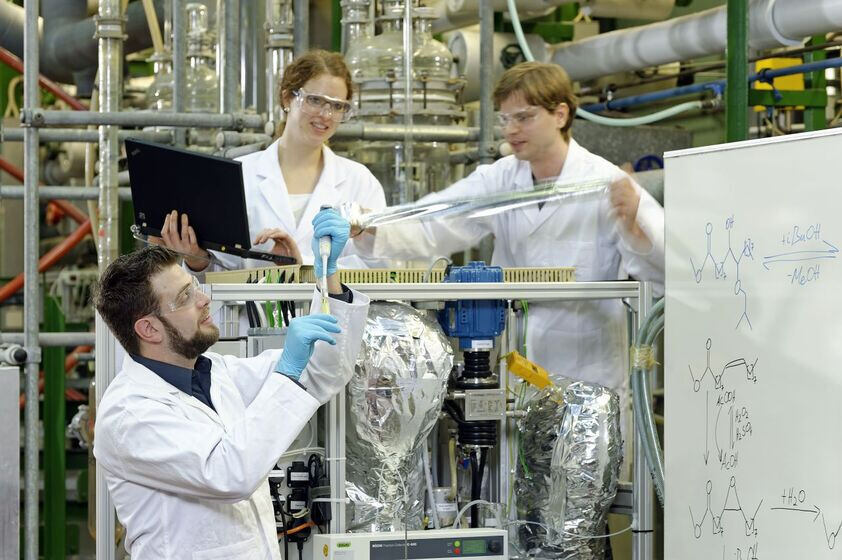 Catalysis research at RWTH Aachen is paving the wave for the use of renewable energies in chemical production.

The gases carbon dioxide (CO2) and hydrogen (H2) are an unlikely couple: While carbon dioxide, as a waste product of the fossil fuel use, is seen as a climate killer, hydrogen is considered a beacon of hope for the use and storage of energy from regenerative sources. Even from a chemical prospective, the two molecules couldn't be more different: hydrogen is highly reactive, as proven by the well-known detonating gas reaction. In contrast, carbon dioxide has less of a tendency to form bonds. It only temporarly forms carbonic acid when it bonds with water. "The most recent research results have demonstrated a clear, suprising potential of this combination for the production of components and products in the chemical value added chain. A prerequisite is that modern catalysts as a kind of matchmaker enable love at second sight," reports Professor Walter Leitner.

Leitner and Professor Jürgen Klankermayer and their team at the Institute of Technical and Macromolecuar Chemistry at RTH Aachen have conducted many of this type of innovative reaction in the lab. They were awarded the European Sustainable Chemistry Award for their work in 2014. They give a summary in a "perspective article" in the current November issue of the renowned science journal "Science".

It's becoming clear that tailor-made molecular catalysts are capable of not only binding CO2 and H2 together but also simultaneously dock them on other reactants. The only byproduct is water, whereby the oxygen is removed from the carbon dioxide, making new bonds possible with the carbon. This allows organic acids, alcohols, or amines to be produced, in which a carbon unit can be incorporated on the basis of CO2 in a controlled manner. This use of carbon dioxide and hydrogen as so-called C1-building block opens up completely new synthesis methods for these important classes of substances. "They can help us avoid expensive and potentially dangerous reagents, determine alternatuve sources of carbon, and make renewable energies for chemical production processes usable," emphasizes Klankermayer.

The Aachen researchers are have come to the conclusion that pairs, which seem unlikely at first sight, can be shaped now for chemical processes according to the principles of green chemistry. This has paved the way for renewable energies to be used in chemical production processes.