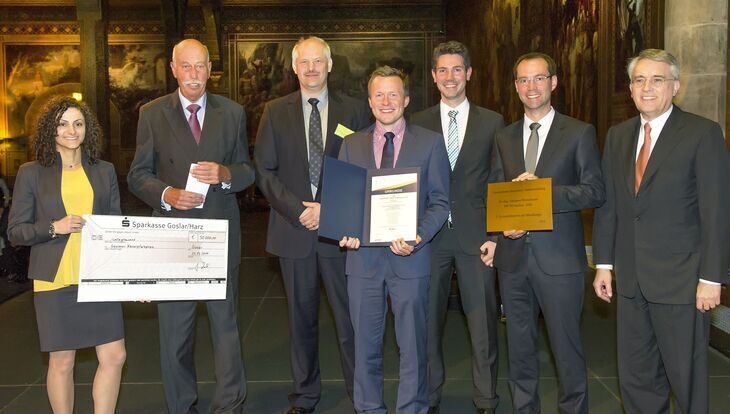 Endowed with 50,000 Euros the prize was awarded for the fifth time during the Metallurgy Day at Kaiserpfalz, the Imperial Palace of Goslar. The award recipient is a team from the Institute of Process Metallurgy and Metal Recycling at RWTH Aachen, IME for short. It received the award for its research project "Process Innovation for Affordable Production of Titanium Alloys from Primary and Secondary Raw Materials."

This is third win for the RWTH institute, having already been honored with the prize in 2008 for its Battery Recycling Working Group and in 2012 for the Nanomaterials Working Group. The scientific coordination of the project was overseen by the director of the institute, professor Bernd Friedrich. He was supported by a team that was directed by Dr.-Ing. Johannes Morscheiser, a RWTH graduate, who completed his doctoral studies in metallurgy in 2014.

The research work in the project, which resulted in numerous doctoral, Master's, and Bachelor's theses, began in 2001. A turbine blade made completely of recycled material was developed in 2014 as the result of national and international collaborations with scientific institutions and industry. The award money is to be used to continue the research.

The Kaiserpfalz Award has been awarded in Goslar since 2008 as part of Metallurgy Day, a meeting for those in the non-iron metal industry. It was initiated by the GDMB Gesellschaft der Metallurgen und Bergleute and the Wirtschaftsvereinigung Metalle. The scientific council, which is made up of university representatives and representatives from associations and the non-iron metal industry, selects the award recipient.