You Are Here: Event Celebrates Foundation of JARA Institutes and Awarding of JARA Junior Researcher Prizes 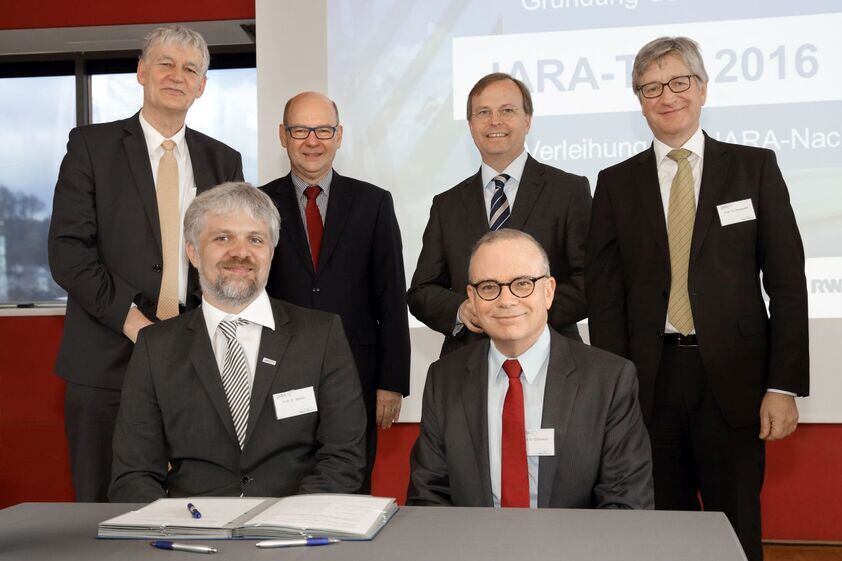 JARA can record another milestone with the foundation of the first four JARA institutes in the field of brain and information research. Since 2007, the partnership between RWTH Aachen University and Forschungszentrum Jülich has stood for a structured path for collaboration between a university and a non-university research institution. The new, joint institutes are a further instrument for collaboration and address large social challenges.

"JARA has developed very well since the beginning. The foundation of the JARA institutes raises the collaboration between Forschungszentrum Jülich and RWTH Aachen to a new level. The outstanding preconditions in JARA are particularly valuable for solving great social challenges, especially in medical research," emphasized Thomas Rachel, parliamentary state secretary at the Federal Ministry of Education and Research, one of the founding patrons of JARA in 2007.

Dr. Thomas Grünewald, state secretary at the NRW Ministry of Innovation, Science, and Research underlined the essential importance of JARA to NRW's science and research landscape. The partnership between Aachen and Jülich can already serve as a model. "I am certain that with the new JARA institutes and professors their collaboration will create even better framework conditions for excellent science and research."

"Aside from the goal of creating flagship projects with a wider reach, JARA wishes to conduct science and research from which the population will profit," said Professor Wolfgang Marquardt, chairman of the board at Forschungszentrum Jülich. Both of the JARA institutes' research fields, brain research and future information technologies, are predestined to fulfill this wish.

Below are the individual institutes that were founded:

Mental illness is at the focus of this institute's research. Professor Frank Schneider, professor in JARA-BRAIN, predicts, "Mental illnesses will pose one of the greatest challenges to the healthcare system in the future." A detailed understanding of diseases and their processes in the brain is the foundation of the development of new, effective therapies. By linking the expertise and infrastructures of RWTH and Forschungszentrum Jülich, scientists here can pave the way for improved treatment of individuals with mental impairments.

"In this institute we aim to use a translational approach to diagnose neuropsychotic and neurodegenerative diseases early on," summarized Professor Kerstin Konrad, professor in JARA-BRAIN. About 50 percent of neuropsychiatric diseases take root during childhood and adolescence. "The earlier a disease begins, the harder it is to treat it," said Konrad. The identification of such impairments as early as possible is a deciding factor for later treatment. The JARA institute's focus is not only on neuropsychiatric diseases in younger patients but also on the suffering in the older population.

In today's digital age information technologies are ubiquitous for everyone. The development of energy efficient computer and communication technology forms the objective of the JARA-FIT institute "Energy-efficient information technology (Green IT)." Dr. Matthias Wuttig, professor at JARA-FIT, was confident: "Moore's Law is no longer sustainable now that the computer processor performance doubles every two years." Future chips require innovative materials and structures in order to satiate the thirst for more performance and, above all, energy efficiency. The JARA institute team is embarking on a search for a solution to this problem. "Oustanding facilities, such as the nanocluster at Forschungszentrum Jülich, significantly support our collaboration," said Wuttig.

The fourth newly founded JARA institute is dedicated to researching quantum information. "We have set high goals for ourselves in the Quantum Information, QI, JARA institute. We envision developing a quantum computer together," explained Dr. David DiVincenzo, professor in JARA-FIT. The proposal for separate collaborative research center was the first step to realizing this undertaking. Such a quantum computer could revolutionize computer technology while also posing a great scientific challenge. JARA offers an excellent foundation to face such a challenge.

JARA Best Master is a poster prize for students who have just finished their final paper or project. This year it was awarded to two excellent posters in the sections JARA-BRAIN and JARA-ENERGY. Both award recipients left a lasting impression with their outstanding academic performance and linking their work to the research in the respective section.

Miriam Menzel won over the jury with her paper on "Simulation and Modeling for the Reconstruction of Nerve Fibers in the Brain by 3D Polarized Light Imaging." Eran Schweitzer likewise convinced the jury with his outstanding poster !A Matlab GUI for the Generation of Distribution Grid Models.”

JARA Excellent Junior is targeted towards doctoral candidates and postdocs, who completed their doctoral degrees within the past six months. The selected works distinguished themselves not only through the oustanding scientific performance and a great degree of orginality. They originated from the recipients taking optimal advantage of the possibilities of the JARA network. The award recipients are Marcel Rosenthal with his paper on "Spin Tracking Studies towards Electric Dipole Moment Measurements in Storage Rings“ and the team Luca Felix Banszerus, Stephan Engels and Michael Schmitz for their outstanding joint paper "Ultrahigh-mobility graphene devices from chemical vapor deposition on reusable copper - Graphen vom Fließband."