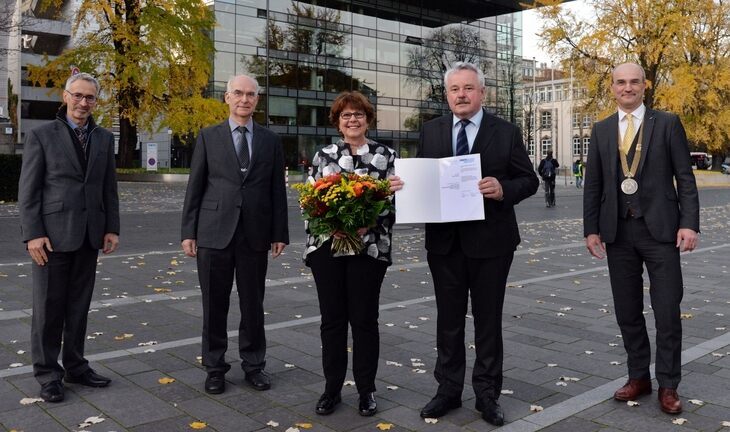 Rector Ulrich Rüdiger of RWTH Aachen University has now awarded Dr.-Ing. Erwin Flender the academic degree and title of Honorary Doctor of Engineering Sciences. Due to the SARS-CoV2 pandemic, only a small group of people attended the award ceremony.

Flender completed an apprenticeship as a lathe operator and then attained higher academic qualifications by attending continuing education classes. After studying production and mechanical engineering at the University of Applied Sciences in Hagen, he studied foundry science at RWTH. Here, Flender also received his doctorate in 1985 on computer-aided simulation and modeling the hot cracking behavior during solidification of heat-resistant cast steel qualities. Together with other partners, he founded the MAGMA Gießereitechnologie GmbH company in Aachen in 1988. The aim was to develop software for simulating manufacturing processes for metal casting. Flender was able to convince the industry of his visionary ideas quickly while also leaving a lasting impression. He committed to following a business strategy with an eye towards internationalization early on. Today, MAGMA offers innovative software solutions in computer-aided engineering with more than 230 employees at nine locations worldwide. Flender also founded SIGMA Engineering, which creates simulation software for the development and production of plastic parts. At 68, he is currently an active shareholder of the MAGMA Group and was its managing partner until 2014.

Through his significant involvement as a volunteer, Flender actively supports the foundry technology sector and, with it, many medium-sized companies. He is Vice President of the Association of German Foundry Experts VDG and President of the German Foundry Association BDG. As a board of trustees member, Flender is, furthermore, involved in the Fraunhofer Institute for Industrial Mathematics in Kaiserslautern and the Fraunhofer Institute for Foundry, Composite and Processing Technology in Augsburg. From 2012 to 2016, the RWTH alumnus was Chairman of the supervisory board of the Otto von Guericke e.V., the German Federation of Industrial Research Associations AIF, which also awarded him the Otto von Guericke Medal for his services in developing the metal casting sector further.

The new honorary doctor is connected to RWTH Aachen University in many ways – for example, as an industry advisory board member for the Internet of Production cluster of excellence. In addition, MAGMA finances the Foundry Institute's doctoral seminar every two years and three Deutschlandstipendium scholarships for RWTH students every year.