In collaboration wtih RWTH biologists a new start-up is developing an alternative cell medium for regenerative therapies. Human stem cells from blood banks are being used instead of fetal bovine serum. 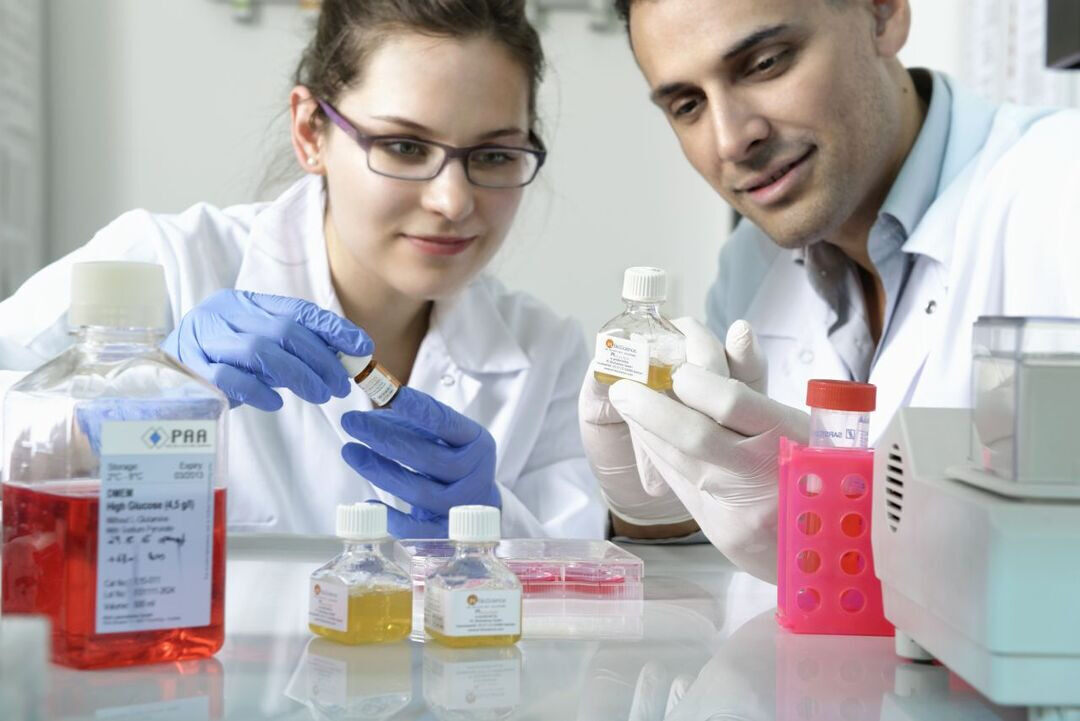 "During my postdoc I worked with mesenchymal stem cells and cultivated them in fetal bovine serum. I then discovered that a humane alternative product was much better suited. I wanted to test it out but I couldn't purchase it anywhere," explained biologist and former RWTH scientist Hatim Hemeda. Together with a team from the Division of Stem Cell Biology and Cellular Engineering, headed by Professor Wolfgang Wagner, he ended up producing the new cell culture medium himself.

On the lab scale the effort and workload was manageable. The result, even better. The new medium a lysate from human blood platelets lead to more than twice as much healthy cell growth. "We use stem cells to study human aging," said Hemeda. Mesenchymal stem cells are also used in regenerative therapies. Here, damaged bone marrow, bones, or fat tissue can be replaced, for example – while simultaneously avoiding the ethically dubious use of fetal bovine serum.

The team acquired the concentrates from blood platelets as a raw material from the University Hospital's blood bank. Due to passed expiration dates the platelets could no longer be used for medical purposes. However, they could still be used for research. Manufacturing the medium, the so called lysate, which is a cell disruption on the blood platelets, is relatively easy: freezing and thawing multiple times is feasible on a modest scale. Yet Hemeda wanted other scientists to profit from the new cell culture medium: as a result he founded PL BioScience GmbH in 2015 – with support from Christian Wilkes. He was already executive manager of a diagnotics laboratory and possessed the necessary business know-how.

The duo received support from the RWTH Founders' College and Professor Wagner : "The product is an excellent development. We exclusively cultivate our cells with platelet lysate." This is also the starting substance for a 3D matrix, in which cells are much more comfortable than on the hard surface of cell culture plastic bottles – a discovery made by Wagner's working group that has been registered as patent by RWTH.

Aside from the liquid medium PLSOLUTION, which is distributed in two qualities, PLMATRIX is the spin-off's second product – in-licensed by RWTH. The company now aquires the raw material for the product from numerous suppliers throughout Germany. More than 250 blood platelet donations are used for one production unit.

Hemeda is convinced that platelet lysate can replace fetal bovine serum in virtually all applications. However the use of fetal bovine serum has been the standard for decades. "There have always been negative reports, such as about a mafia that distributes adulterated bovine serum."

PL BioScience is not the only supplier of human blood platelet lysate. There are also competitors here and there in Europe. In 2010, Mill Creek in the USA was the first company to put platelet lysate on the market for clinical use in accordance with good manufacturing practice. This doesn't worry the young entrepreneurs: "It's in our best interest that as many companies and scientific working groups convert to platelet lysate. Our matrix is an exclusive product and we have further product ideas in development," emphasized Hemeda.