You Are Here: New Wheat Strain Resistant to Mildew

A group of researchers headed by professor Ralph Panstruga has made a significant breakthrough in the fight against powdery mildew. Through targeted crossing they have cultured a new wheat strain to be the base material for the development of new types that would also be resistant to fungal infestation. 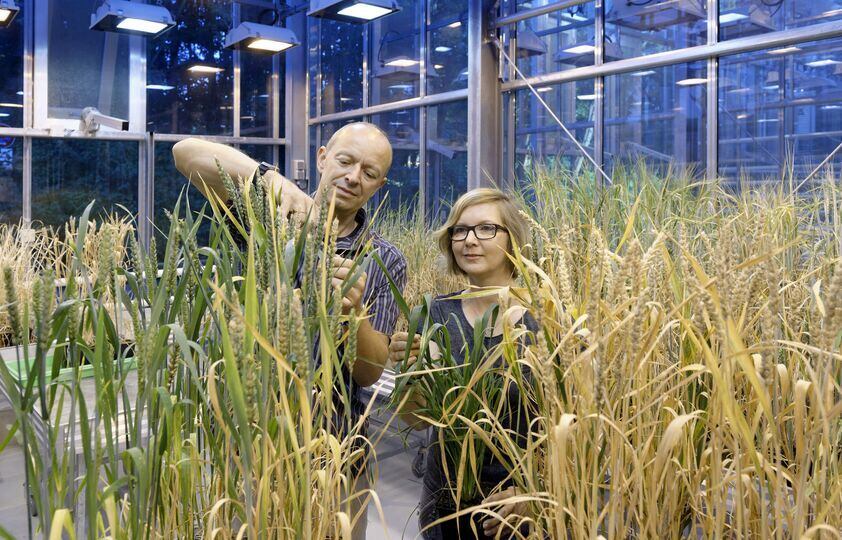 A professional article about the research project will be appearing in the September issue of the Planet Biotechnology Journal* and will make seed producers and cultivators sit up and take notice. Mildew is responsible for crop failures worldwide and requires regular use of fungicides.

Funded by the Fedral Ministry of Food and Agriculture and the Gemeinschaft zur Förderung der Pflanzeninnovation e.V., the project began four years ago. Barley at the Institute of Biology I served as the model. Science has known for a long time that some types of this grain possess a natural defense mechanism against mildew. The mechanism is the result of a missing protein in the genotype. The mildew cannot spread without this protein and distribute its cottonwool-like coatings on the plants.

Ten years ago the discovery was made that other plants also have this defense mechanism. The absence of this protein, including in arabidopsis thaliana, also called mouse-ear cress or thale cress, as well as in tomato and pea plants, was proven in a RWTH lab. And what about wheat, which plays an important role in global nutrition and, when attacked by the mildew, ensures significant crop failure annually? Even though wheat has a very complex genome, the Aachen biologists accepted this challenge. Unlike barley, in which there are only two copies of the gene in the cell nucleus, wheat has six copies.

"In China, resistant strains of wheat were already generated two years ago," reports Panstruga. "But a transgenic approach was used there. And we don't want that in Europe." Until now resistances against mildew have been crossed, a lengthy process with only moderate success. As soon as a type of wheat was resistant, the powdery mildew would change and attack the supposedly resistant strains.

Scientists wanted to find a permanent solution and established contact with English Rothansted Research, a plant research center near London, which provided the RWTH team with mutated wheat seeds. The genotype of these parent plants was then specifically examined for mutations. The plant detectives searched for the absence of the protein that originally made mildew resistance possible. An "original mutant" was finally found after four years of multiple crossings. It is now the foundation for the further devleopment of the resistant wheat.

"We did not completely shut down the protein but rather damaged it with random mutations," explains the Aachen cell biologist. Plants wihtout the protein age sooner, which in turn shortens the maturation process and reduces the yield. The base material is currently being tested on two outdoor trial fields. Since these are not genetically modified plants, this is effortless. In a further proposed project, scientists aim to investigate how this wheat strain behaves under field conditions, whether other diseases strongly damage it, and whether it ages at a normal or quicker rate. Panstruga, who is one of the most cited plant scientists in the world, has other crop plants in mind, where the mildew problem has not yet been solved.

The process described in this press release was supported, on the orders of the German Bundestag, with funds from the Federal Ministry of Food and Agriculture, BMEL for short, through the Fachagentur Nachwachsende Rohstoffe e.V. – FNR – which served as the executing organization for the BMEL's funding program for sustainable raw materials. The author is responsible for the content of this publication.