You Are Here: Soft Matter Micro Propellers and Micro Tweezers

Aachen is commonly known to be a hot spot for the development of large machines and robots. However, Aachen-based scientists also develop tiny robot objects in the micrometer range. 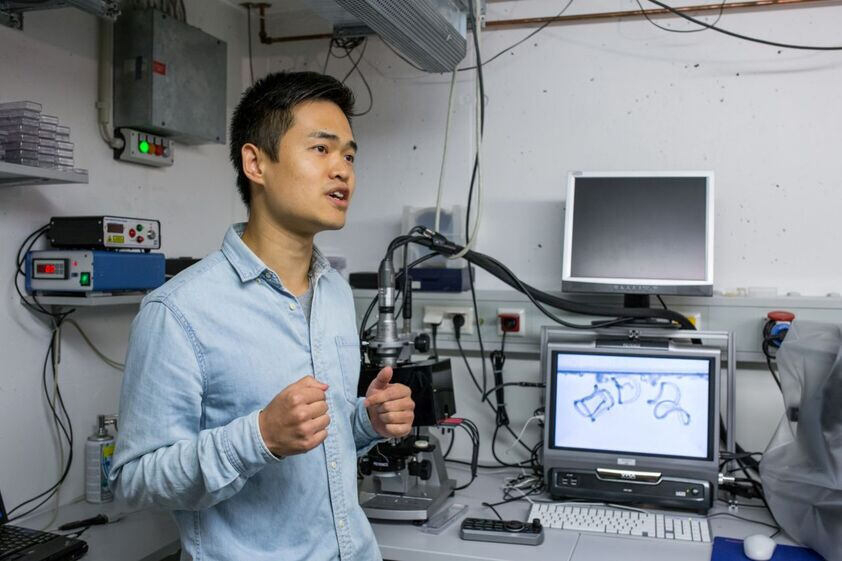 Copyright: © Philipp Scheffler, DWI PhD student Hang Zhang in front of his microscope, which he uses to analyze tiny gel structures that can autonomously move, rotate, and pinch in water in a light-dependent manner.

Professor Martin Möller, director of the DWI Leibniz Institute for Interactive Materials and professor for Textile and Macromolecular Chemistry at RWTH Aachen University, and his team conduct research on gel-based microswimmers, which can autonomously move, rotate or pinch in water in a light-dependent manner. The scientists described their remarkable gel objects in a recent publication in the academic journal ‘Advanced Materials’.

Natural cells and microorganisms use a large variety of mechanisms for their motion and locomotion, providing the basis for many processes in our body and in the environment. Based on the characteristics of such natural "swimmers," scientists anticipate a broad spectrum of applications for artificial microswimmers, including medical applications, as well as applications in materials sciences or life sciences. Hence, the development of artificial microswimmers has become a prominent field of research.

In this context, the researchers tackled a challenge which was anything but trivial: “We wanted to develop an agitation mechanism that can be implemented even for very small objects,” says Dr. Ahmed Mourran, project leader at DWI. As doctoral candidate Hang Zhang explains, “We also wanted to make sure that the motion does not depend on external gradients, such as temperature or concentration gradients. This is the case for many artificial microswimmers developed so far and it limits their motion spectrum.”

In their research project, which was funded by the German Research Foundation, DFG for short, the material experts developed soft gel architectures that can perform simple movements in water. This includes a micro propeller, which spins around its axis, and an L-shaped gel with long arms, which twitches like tweezers. The highlight, however, is a rotating gel helix, which can "walk" along a wall.

For their microswimmers the researchers used sponge-like elastic gels, whose main component is water. Such gel particles can drastically change their shape by swelling or deswelling in water. The researchers can control these shape changes using infrared (IR) light pulses with a specific pulse duration. The light is absorbed by tiny gold nanorods, which are integrated into the gel. The nanorods convert the light into heat and emit the heat to the gel surrounding the nanorod. This leads to a sudden heating of the gel and causes a short snapping motion. Once the IR light is removed, the gold nanorods and the gel cool down very quickly. The snapping motion is programmed by the initial shape of the gel and is triggered by the light-induced temperature jumps, which are followed by a somewhat slower shape change of the gel. Using stroboscopic IR light pulses, the scientists can trigger fast periodic motion sequences.

The IR light-driven gels respond to foreign particles and could be used for sensing, mixing, pumping, separation or delivering of liquids in small capillaries. Due to the deep penetration of IR-light into living tissue the gels could also be used as coatings for medical devices.

Within his ERC Advanced Grant, Martin Möller aims to further advance the microswimmers to obtain self-oscillating systems that show iterative movements even under continuous IR-irradiation.