Earlier this month, five companies received the EBUS award, which is presented for environmentally-friendly electric bus projects in public transport. Federal Minister Dr. Barbara Hendricks and RWTH Professor Dirk Uwe Sauer both were presented with special awards for their dedication to the development and promotion of environmentally-friendly innovations in public transport. 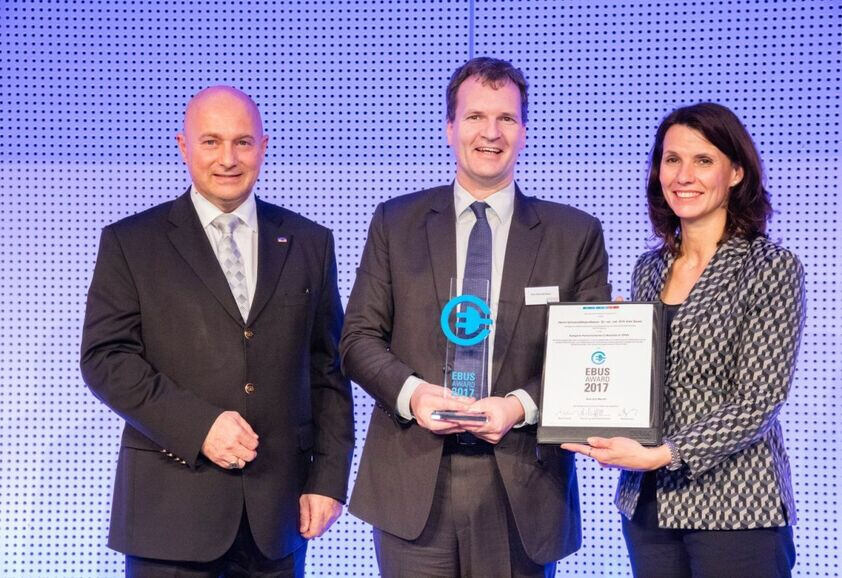 Sauer received the award primarily for his sustained commitment to further developing and applying battery technology for mobility applications. “For almost ten years now, we at the Institute for Power Electronics and Electrical Drives have been concerned with the electrification of buses for local public transport solutions. As researchers, we are very pleased to see that both manufacturers and operators are embracing and using this clean, silent, sustainable technology on such a scale,” said Dirk Uwe Sauer.

Eligible for the EBUS award are projects and products that are used on an everyday basis, and the award winners are selected by transportation companies. Martin Schmitz, Chairman of the Traffic and Logistics Forum Germany, lauded the efforts and successes in sustainable public transport, emphasizing the future significance of electric buses for the transportation sector: “German local public transport, with its electric trains and trams, has been an early proponent of electric mobility. Now the number of electric buses in local transport is rising steadily, which reduces the strain on the environment, makes urban life in Germany more attractive, and demonstrates the innovative force of the traffic sector.”