You Are Here: Spiderwebs Made of Nanofibers

Spiderwebs Made of Nanofibers 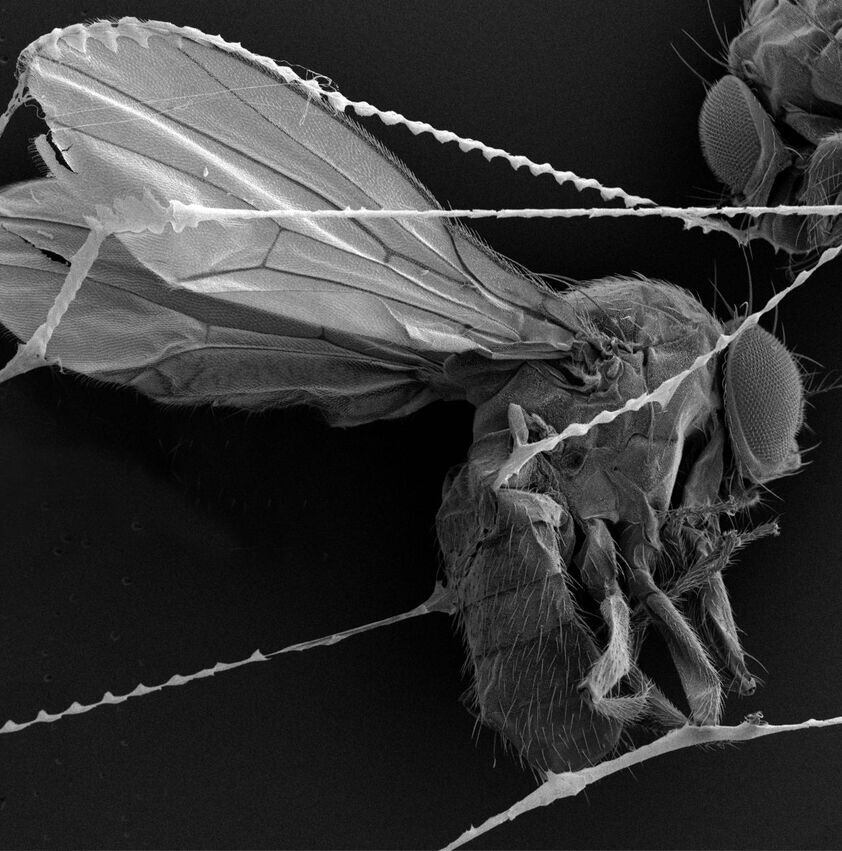 Copyright: © Hana Adamova A fruitfly covered in the captive threads of an uloborus plumipes spider

Cribellate spiders are those, which in contrast to most other spiders, do not use glue on their threads but rather are capable of turning their silk into complex structures. This takes place by linking up to 40,000 nanofibers. The fiber is completely dry, yet still sticky. This ability to arrange nanofibers is unique both in the animal kingdom and in technical development processes.

Within the framework of the project "Cribellate Spiders," the Developmental Animal Biology and Morphology working group at RWTH's Institute of Biology II (Zoology) collaborated with Johannes Kepler University Linz and Johannes Gutenberg University Mainz to publish a study on the biological function of cribellate threads. In the project the Aachen scientists investigated how different cribellate spiders produce their silk, in order to biometrically transfer the applied principles to technical processes. Addtionally, Dr. Anna-Christin Joel, a member of Professor Peter Bräunig's working group, conducts research on the biological function of this spider silk in order to understand how arachnids with such complex silk capture their prey.

In the recently published study the Aachen researchers and their collaborative partners demonstrate how the silk of cribelllate spiders captures insects in a way that was previously unknown. They discovered that individual nanofibers could not be detected, but rather were encased in a fluid as soon as the insect touched the web. An analysis of this fluid showed that the same chemicals were present as are in wax, that insects employ on their chitinous exoskeleton to protect themselves against evaporation. When an insect comes into contact with the web, the wooly nanofibers soak up the waxy chemicals of the chitinous exoskeleton. This turns the lightweight silk into a solid structure. "The result of this adhesion is similar to the principle of a fiber-reinforced plastic. The prey strengthens its own jail," says Dr. Joel, head of the project.

In research the assumption is that all spiders were cribellate at an earlier time in evolution. Nowadays, however, there are more ecribillate spiders, which do not have the ability to capture their prey using nanofibers, but rather must produce an extra glue. The origin of this development is at the focus of much research and can now be understood using the newly described adhesion mechanism of the Aachen researchers. "There is a theory that the great pressure of evolution placed on insects by cribellate spiders led to only those insects surviving, whose exoskeletons did not react with the spider silk. We suspect that the adhesion principle was abrogated, whereby spiders thus had to produce threads that were capable of sticking themselves," explains Dr. Joel.