"In both sports and science competition is essential for one's own development, whether in the form of a good opponent during a match or an excellent scientific partner in a joint project," explained Professor Wolfgang Dahmen from the Chair of Mathematics. 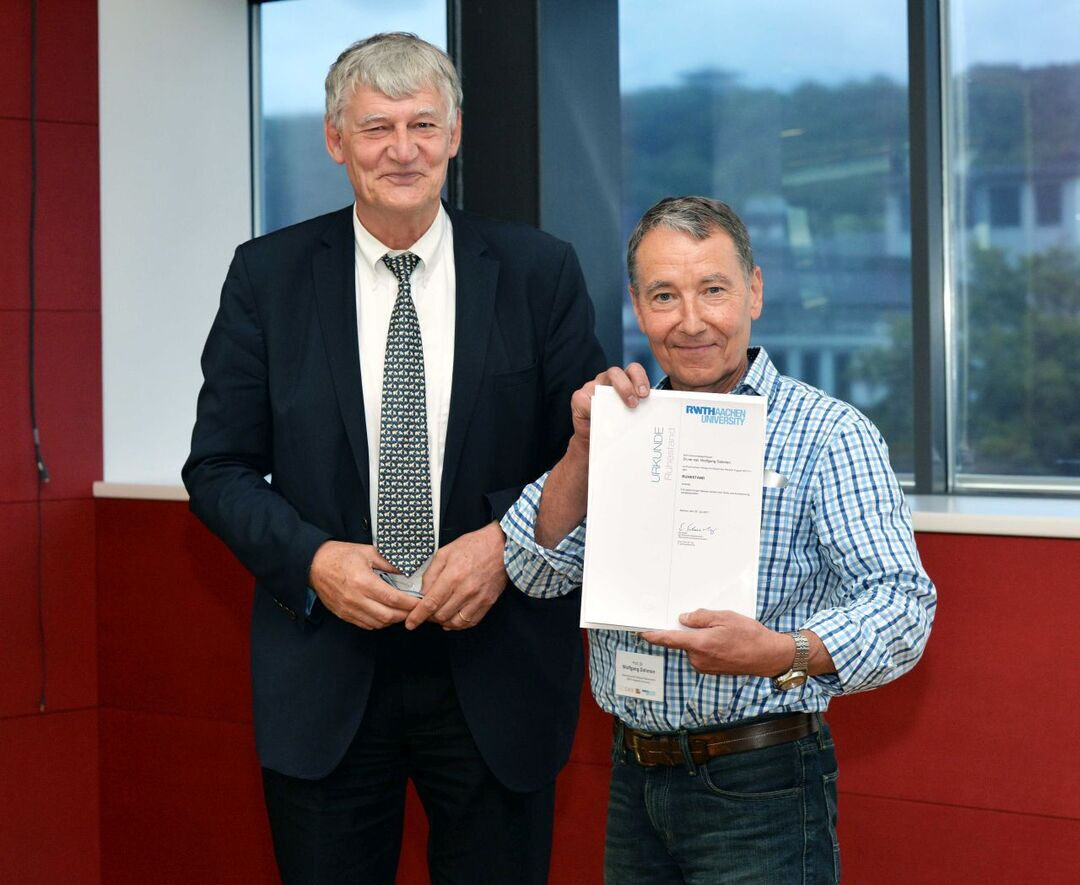 © Andreas Schmitter RWTH Rector Ernst Schmachtenberg honors Professor Wolfgang Dahmen from the Chair of Mathematics on the occasion of his retirement during an international conference hosted by AICES.

The mathematician was honored for his professional activities during an international conference hosted by the AICES graduate school, Aachen Institute for Advanced Study in Computational Engineering Science. "At RWTH I was lucky to meet impressive researchers in other disciplines. My theoretical fundamental research particularly profited from numerous collaborations with colleagues from engineering and the natural sciences – and vice versa,“ says Dahmen, reflecting on his time in Aachen. He will move to the USA to continue his research after his retirement from RWTH.

"In the course of consistently growing networks and connections the dynamic of science significantly relies on collaborations," emphasizes Dahmen. There are often smaller groups in basic research areas, whereas large projects play a decisive role in application areas. Thus, he worked, for example, on a project focused on transpiration cooling. Such incredibly great heat loads result in the combustion chamber of a rocket engine, that the surrounding material is often compromised. The same occurs when a space capsule reenters the atmosphere. A suitable dose of cooling gas can be directed into the hot gas flow as protection. Mathematic models, resulting algorithms, and digital simulations can support this process.

A focus of the mathematician's basic research was approximation theory. This was also the primary topic of the Aachen Conference on Computational Engineering Science 2017, which AICES organized to honor Dahmen. The conference brought together leading experts in theory, methods development, and applications in connection with problems in computational engineering. It presented the most recent and modern research and contributes to interdisciplinary collaboration. 130 participants from around the world came to Aachen to attend.

The AICES graduate school conducts interdisciplinary research at the cross-section of mathematics, computer science, and engineering. Modern simulation tools have become indispensable in industry. With the help of such tools, increasingly complex plans and optimations have been implemented in many branches of industry, such as in the construction of automobiles and airplanes, in the chemical industry, and in medical engineering. The central tasks reside in the mathematical illustration of technical problems and their implementation on computers using methods from computer science. "AICES is training a new generation of doctoral candidates, who master these methods," emphasizes Dahmen.

Dahmen is an alumnus of RWTH. After stays in Bonn, the USA, Bielefeld, and Berlin, he returned to Aachen. He was appointed to the North Rhine-Westphalian Academic of Sciences, Humanities and the Arts in 2001. One year later he received the Gottfried Wilhelm Leibniz Prize. He was a member of the senate of the German Research Foundation from 2005 to 2011. He has been an adjunct professor at the University of South Carolina since 2005. In 2009, he was nominated a member of Leopoldina.

Science is not the only component of the mathematician's life that has played an important role. He became a dedicated taekwando athlete at the age of 15 and regularly won competitions. In May 1975, the then 25-year-old took home the only victory for the German national team when facing South Korea at the Taekwando international competition in Essen. The same year he was runner up at the taekwando world championships in Seoul. After winning two open European cups in Brussels and Paris and numerous German championship titles, he won third place at the European championships in Barcelona in 1976.