You Are Here: RWTH’s Anniversary Event: Science Evening in Berlin 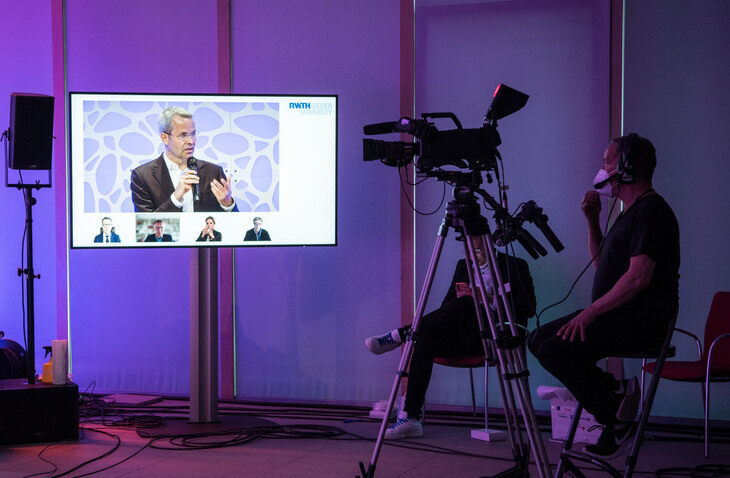 Universities all over the world endeavor to constantly face new challenges. But is the historically evolved higher education system so well positioned that it can meet this demand in the short time required? And what does society expect from universities in this regard? This initial situation motivated RWTH to invite guests to the hybrid science evening at the Permanent Representation of the German State of North Rhine-Westphalia in Berlin under the title "The New Fiction of a Good Science – in Need of a Paradigm Shift?!

RWTH Rector Professor Ulrich Rüdiger and University Chancellor Manfred Nettekoven emphasized how important such intensive exchanges are. The Science Evening was initially planned as a kick-off event to mark the start of RWTH’s 150th anniversary celebrations in 2020, but the pandemic meant the University had to cancel the event. Nevertheless, RWTH stood by its intention to initiate a discussion on the central issues of good science.

With the participation of German Chancellor Angela Merkel and NRW Minister President Armin Laschet, patron of the event, the focus was on the innovative capacity and robustness of universities such as RWTH, but also of the science system as a whole, in May 2021. "RWTH excels in putting what is learned and researched into practice. In its search for answers, RWTH always stays on top of the times, if not even one or two steps ahead," the RWTH Chancellor explained.

There Will Be no "More of the Same"

After taking stock of the initial situation, the necessary teaching developments as a prerequisite for transfer and innovation by universities were discussed in three different rounds. It became clear that, in principle, there must not be "more of the same". For example, the pandemic already presented universities with the challenge of reforming themselves in a very short space of time.

Anant Agarwal, a professor at the Massachusetts Institute of Technology (MIT) and founder of the digital university edX, was one keynoter who spoke of the "new normal" that now prevails. He sees the opportunity of a global education, that students in the future will be able to choose from the best educational offers worldwide and take courses virtually from any location. Keynoter Lynda Gratton, a professor at London Business School, went one step further: She wants to fundamentally rethink teaching – not only in virtual formats, but also in structural terms.

To what extent or what quality of digitization is necessary and efficient was the focus of the section "University 4.0: Teaching and Learning in the Era of the Fourth Industrial Revolution”. Moderated by Prasanna Oommen, the discussion between Professor Simone Buitendijk, Vice-Chancellor of the University of Leeds, Professor Anna Karlsson-Bengtsson, Vice-President of Chalmers University of Technology, Professor Andreas Barner, President of Stifterverband, and Raphael Kiesel, a doctoral candidate in Aachen, made it clear that digitization alone does not lead to sufficient improvements in teaching.

Can Expectations From Outside Be Fulfilled?

Dr. Anne Schreiter, Managing Director of the German Scholars Organization and RWTH Vice-Rector Malte Brettel discussed the topic "University Mission (Impossible?): From Role Model to Supermodel" with Dr. Georg Schütte, Secretary General of the Volkswagen Foundation, Dr. Wolfgang Rohe, Chairman of the Management Board of Stiftung Mercator, Professor Rianne Letschert, Rector of Maastricht University, Professor Thomas Girst, Head of Cultural Management BMW Group, and Stefan Hilterhaus, Artistic Director of PACT Zollverein. The panelists focused on the demands that are being made on universities today and in the future, including from outside the institutions.

The fact that universities, more than almost any other institution, can sufficiently network with each other all around the world in order to jointly master global change was a central result of the evening. And the ideas from this exchange are now to be explored in more depth: "The New Fiction of Good Science – Talking About... Virtual Learning” will continue as an event series. The dates will be published soon. The next event will focus on the topic of innovation and sustainability.