You Are Here: Science with Perspective

The University once again invites the public to the RWTH Science Night "5 to 12". Scientific topics will be broken down and demonstrated in numerous presentations, experiment stations, and exhibit stands. 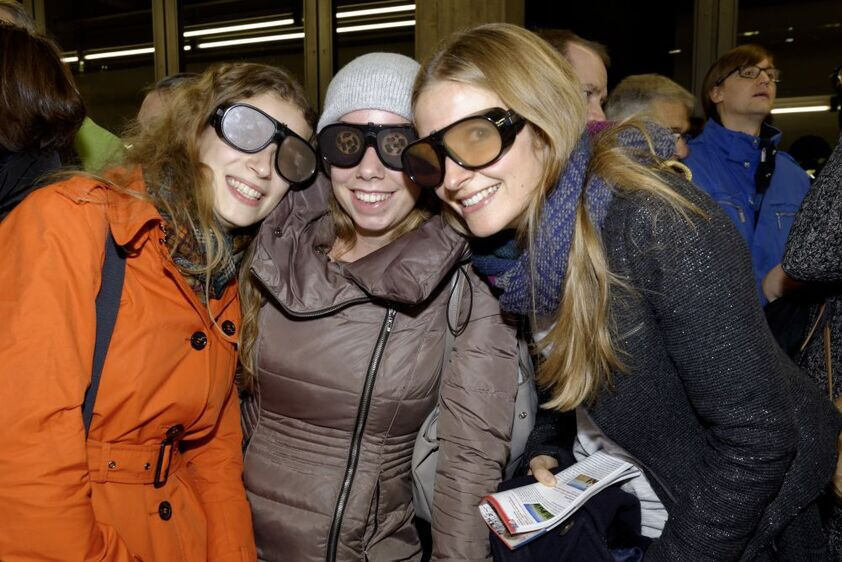 This is the 15th anniversary of the "5 to 12" RWTH Science Night, which will be held on Friday, November 10, 2017, in the C.A.R.L. lecture hall complex in Claßenstraße for the first time. Scientific topics will be presented in atypical manners at an unusual time. The event's popularity has grown since its premiere in 2003 to have more than 6000 attendees. This year is a trial for holding the event at C.A.R.L.

Between 7pm and midnight attendees can discover exciting topics and findings at RWTH in lectures and experiment stations and look over scientists' shoulders. The program includes answers to everyday questions as well as those on top-level research. "The participants' enthusiasm allows us to once again offer such a comprehensive program. Whether it's a childrens lecture, the physics fair, or theater and music, we guarantee an entertaining evening at the RWTH Science Night," says Thomas von Salzen from the Department of Press and Public Relations. The event concludes at midnight with a big science party, where RWTH professors spin records as DJs.

Football and artificial intelligence – disappointment or joy? Professor Joost-Pieter Katoen from the Chair of Computer Science will explain how mathematical models can be used to already determine the German football champion. In contrast, the question of how modern man came to Europe will be answered by professor Frank Lehmkuhl from the Chair of Physical Geography and Geoecology. The energy transition is bringing the development of new fuels along with it. Professor Stefan Pischinger from the Tailor-Made Fuels from Biomass Excellence Cluster will thus be giving the lecture "Electricity in the Tank?" on the development and implementability of these fuels. "A lot of fiction, little science?" asks Dr. Eike Permin, who will explain the research conducted at the Fraunhofer Institute of Production Technology, IPT, such as how artificial intelligence is used in production. In the childrens lecture "Fire and Ice," professor Ulli Englert from the Institute of Inorganic Chemistry, will explain what the freezing cold and boiling heat have to do with chemistry.

On the go with a concrete canoe and race car – speed or downfall? The question of whether concrete can swim will be answered at the Excellence Initiative stand, where attendees marvel at a concrete canoe. Roboterclub Aachen e.V. will show off an exciting duel at its stand. There different teams will compete against each other using robots and overcome obstacles. From there you can quickly go to the Formula Student and Ecurie Aix stand. The team will be presented its race car with an electric engine that it designed and built itself. Those looking for more of a hands-on experiment will feel right at home at the physics fair and can experiment to their heart's content.

Competition and good beats. Fans of the traditional "Science Slam" lecture duel can look forward to another round at the "5 to 12" Science Night. Students, employees, and teachers from RWTH will be slamming about exciting university topics. Everything is allowed that is permitted by the house rules: lectures, presentations, music, film. At the end the audience vocally decides who goes home as the champion of the entertaining evening. RWTH chancellor Manfred Nettekoven will moderate the event.

The scientific lectures will be supplemented with art, theater and music. The English-language student theater group Actor's Nausea invites the public to attend and follow along its entertaining production. Music will be provided by Collegium Musicum, students from the University of Music and Dance, and the RWTH Big Band.

Lasers and high voltage. Amazing sculptures will be created during four spectacular laser shows. Laser pictures will move with astounding synchronism to music throughout the room. During the high voltage show, participants can experiment themselves till their hair stands up.

The Science Night traditionally ends with the professors' science night, during which a half dozen professors replace the DJs and bring the audience to their feet.