The Carologistics team, formed of students from RWTH and FH Aachen, is taking part in the major league competition "RoboCup Logistics League," which aims to advance research in the field of robotics. At the annual competition, teams from around the world must prove their ability in various disciplines. During the RoboCup Logistics League, two teams compete against each other using three mobile autonomous robots in an intralogistics scenario. 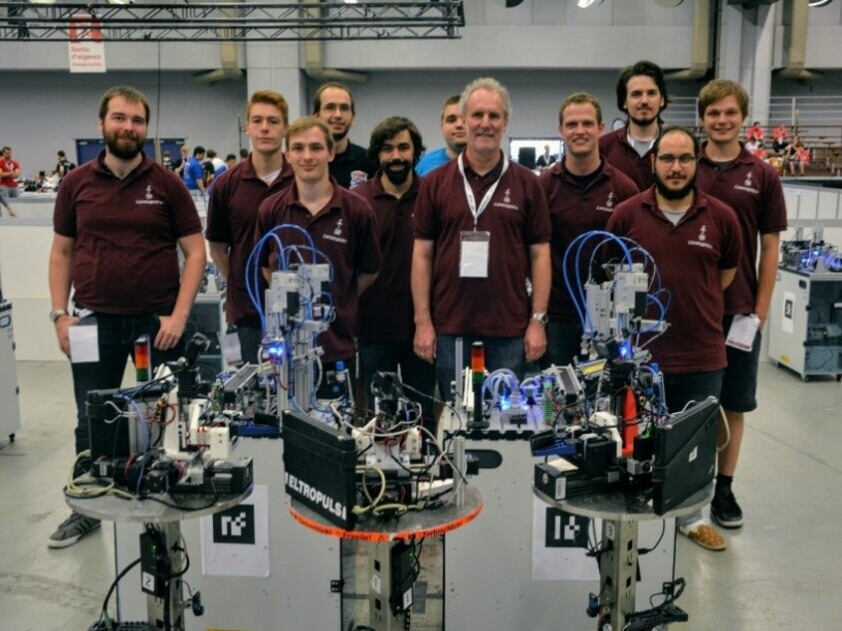 The competition subject essentially portrays the idea of industry 4.0. Intelligent machines are to be able to take on the production of complex products in a dynamic manufacturing environment. Students must develop suitable software and hardware for mobile robots, which can be used to master logistics activities.

To show they are qualified for such tasks, the robots must be able to negotiate several obstacles during the competition. One of the tasks, for instance, includes exploring a previously unknown manufacturing environment or the independent identification of available machines in order to guarantee an optimal flow of material among several assembly stations. Software development is subdivided into the components of planning, skills, and basic components.

Students are able to develop the appropriate hardware with the help of the mobile robot platform Robotino provided by Festo AG & Co. KG Among others, a laser scanner and 3D sensors, which allow robots to perceive the manufacturing environment, can be mounted on this platform and integrated into the control system. Students may then design a special "gripping system" on this basis, which will allow the robot to pick up various goods in transit from conveyor belts.

The software development poses the greatest challenge for the students. In particular, the autonomous and efficiency-oriented scheduling of separate processes within different areas of tasks to be accomplished by the mobile robot is extremely complex. In 2017, the Carologistics team was able to defend their world champion title. While they earned third place the following year, the team was able to repeat their previous success at the 2019 competition in Sydney, Australia, where they won the world championship title once again.