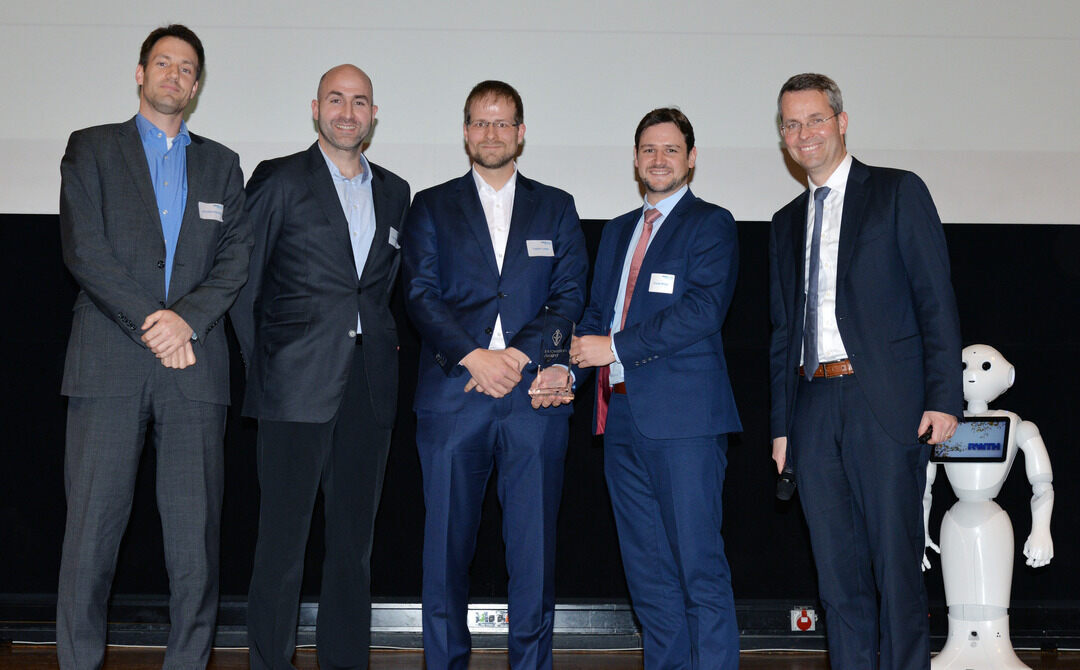 RWTH Aachen announced the recipients of the fourth Innovation Award. The award recognizes three university projects every year that contribute to the standing of the Aachen region as hub of innovation.

Tim Schröder, Dennis Bosse, and Professor Georg Jacobs from the Chair for Wind Power Drives were awarded third place for their project "FlexPad - Plain Bearing Design for the Main Bearing of a Wind Power Drive." Due to their geometry, plain bearings require less space and their parts are economical and can be easily swapped out. They increase the lifespan and thus the profitability of wind power drives. Until now plain bearing casings were quite stiff causing them to warp under heavy loads. In the FlexPad project, scientists took the opposite approach: they focused on flexibility and the ability to re-shape individual elements by using a conical bearing design. The development can significantly contribute to increasing the availability of wind power drives better, thus also making a contribution to the energy transition.

Second place for the RWTH Aachen Innovation Award was presented to Robert Brüll and the project "Organoglas: Completely Transparent Fiber-Reinforced Plastics." At the Institute of Textile Engineering a material was developed that is made out of a thermoplastic fiber composite from flat glass fibers and a coordinating matrix. Organoglas is transparent, high-strength, lightweight, freely moudable, and recyclable. These properties allow it to be used in cars, aircraft, and space probes. Organoglas can also present other opportunities to reduce weight in skyscraper constructions and other fields of application.

Jan-Dirk Reimers, Tobias Berthold, Tobias Lange, and Claude Weiss from the Institute for Power Electronics and Electrical Drives were the happy recipients of the first place for the Innovation Award. In their project "TorqueWerk" they develop and produce modular, segemented, and easily scalable torque motors that are both particularly suited for system integration as direct moment drives and easily servicable. In the future these drives will be primarily used in industrial high-torque applications, such as the construction of machines and plants, machine tools, automation engineering, as well as in wind power and forklifts. The modular system interfaces allow machine manufacturers to pursue new designs by offering drive solutions without special complex or time intensive sizing. The segmentation of the motors in modules enables a scaling of the torque and the integration of the drive in geometrically difficult installation spaces. In this way, application-adapted machines with a large number of variants can be set up and effectively mass produced.