You Are Here: Always Bug-Hunting

RWTH computer scientist Professor Joost-Pieter Katoen is to receive an Advanced Grant from the European Research Council. The ERC Advanced Grant is considered the most prestigious European research award. 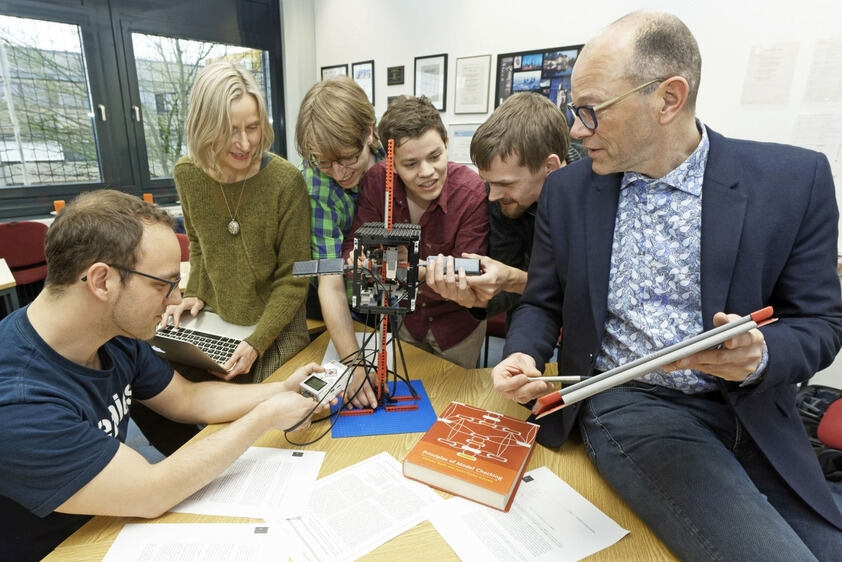 If pressing the volume button on the TV remote control does not have the desired effect, this is an uncritical error – even if the passionate cyclist and RWTH professor Joost-Pieter Katoen would have liked to increase the volume for the final sprint of a cycling race.

While most TV watchers don’t pay much attention to minor problems with the remote control, the Aachen computer scientist is quick to identify the most likely cause of the glitch – an error in the software which controls the interaction between the remote control and the TV set. In this case, the error is not critical. But it shows that even though software failures are rare, they occur on a regular basis. And they may have disastrous effects: in satellites, power plants or, in the near future, in self-driving cars.

Katoen is an expert in identifying software errors before they actually occur. He is one of the most recognized scientists in the field of model checking – his book “Principles of Model Checking,” co-authored with the Dresden professor Christel Baier, is the standard work in the field. Now he has been awarded a so-called Advanced Grant from the European Research Council, ERC for short, the most important research award in Europe. “I am excited,” Katoen says.

The European Research Council awards such grants to support outstanding researchers in pursuing ground-breaking, high-risk research projects and in opening up new interdisciplinary fields of research. ERC grants are awarded in three categories, depending on the researcher’s experience. Projects by excellent established researchers receive a funding of up to 3.5 million euros for a period of maximally five years.

As Katoen explains, he works at the theoretical end of the spectrum of computer science. He studied computer science and completed his PhD at the University of Twente; subsequently, he worked as a postdoc at the Friedrich-Alexander-Universität Erlangen-Nürnberg. With the help of sophisticated algorithms, he is able to calculate millions – possibly even billions – of states. These algorithms are implemented in software tools, some of which contain hundreds of thousands of lines of code and which took about 20 person-years to develop. Katoen investigates the reliability of software for many clients, including the European Space Agency, ESA, some renowned car-manufacturers, or corporations such as Siemens.

The Needle in the Haystack

The key question he is concerned with is, “Can we predict whether and when an error will occur?” The framework conditions for making such predictions are becoming increasingly difficult, as software is getting more and more complex. Billions of states have to be computed as quickly as possible; it is an almost mathematically intractable task. The metaphor of the needle in the haystack comes to mind, and Katoen explicitly mentions it. “For us, it is a sport,” he says. And to stick to it, you need the discipline and the stamina of a racing cyclist.

And why is it useful to know about possible errors? It is important as you can build redundancies into the system that are available as soon as an error occurs. If an error results in the failure of a processor in a satellite, for example, another can stand in right away. On a cycling tour, Katoen always carries two spare inner tubes for the tires – a flat tire is typically unexpected and cannot be easily predicted.

Now, Katoen was again rewarded for his stamina and discipline – this time with the ERC Advanced Grant. It is a rare honor: In 2017, out of the 2,166 applications received by the ERC, about ten percent were approved. Since 2010, ten RWTH researchers have been awarded an Advanced Grant. Five scholars have received a Consolidator Grant, 18 a Starting Grant.

Dr. Dominik Schillinger is currently an assistant professor at the University of Minnesota. As a result of his approved proposal for the “ImageToSim“ project, to be conducted at RWTH as a host institution, Schillinger will receive 1.6 million euros funding. The project is scheduled to start in August 2018 at the Institute of RWTH professor Marek Behr.

Schillinger is convinced that virtual simulation is set to be the technology of the future, for instance in medicine, as it makes it possible to make reliable diagnoses and select optimal treatments for each individual patient. To this end, he conducts research on a new generation of simulation tools processing patient-specific CT data, which can be used in hospitals in an automated approach. Aside from the ERC Starting Grant, Schillinger succeeded in acquiring funding for his own junior research group from the DFG’s Emmy Noether program.

“Receiving an ERC grant feels a bit like winning a Gold Medal at the Olympics,” says Joost-Pieter Katoen. In his field, only about a dozen of professors receive comparable funding. In Germany, a total of 43 researchers are benefiting from an ERC Advanced Grant. Katoen wrote the grant proposal for his project, titled “FRAPPANT – Formal Reasoning About Probabilistic Programs: Breaking New Ground for Automation,” during a sabbatical, which he spent as a visiting professor at the Institute of Science and Technology (IST) Austria in Klosterneuburg. Three initial drafts were scrapped. “I am always critical, especially of myself,“ says the 53-year old scientist. The grant provides great recognition for his entire team: “I am perhaps at the steering wheel, but without my team, which is the true engine, I would not be able to move forward in this way.”

He now has 2.5 million euros at his disposal, which he will use to expand his team and to modernize the facilities and equipment of his institute. Then he will be set to make further significant progress in his research without having the pressure to acquire further external funding. The primary research focus will be on the verification of software programs whose succession of operations is not fully predictable but determined by rolling the die every now and then, so to speak. As Katoen points out, “This is in fact computationally intractable, but we will try to check them anyway.”