You Are Here: A Conversation With Bernd Hentschel

A Conversation With Bernd Hentschel

Dr. Bernd Hentschel is deputy head of the Virtual Reality and Immersive Visualization Group at RWTH Aachen University. He studied Computer Science at RWTH and completed his doctorate in 2009 under the supervision of Professor Torsten Kuhlen. His key research interests include the analysis of subject-specific characteristics in large simulation datasets, parallel visualization algorithms, and immersive visualization methods. Dr. Hentschel has teamed up with researchers from different simulation-based fields to investigate new ways of exploiting the advantages of VR-based user interfaces for complex visual data analysis problems.

As a Kármán Fellow, Bernd Hentschel participated in the activities of the CDUX group ("Computing and Data Understanding at eXtreme Scale") at the University of Oregon. Here, he worked on the visualization of extremely large datasets and files. In our interview, he reports on his “eventful” research stay in Oregon, which led to further collaboration with researchers from his host institution. 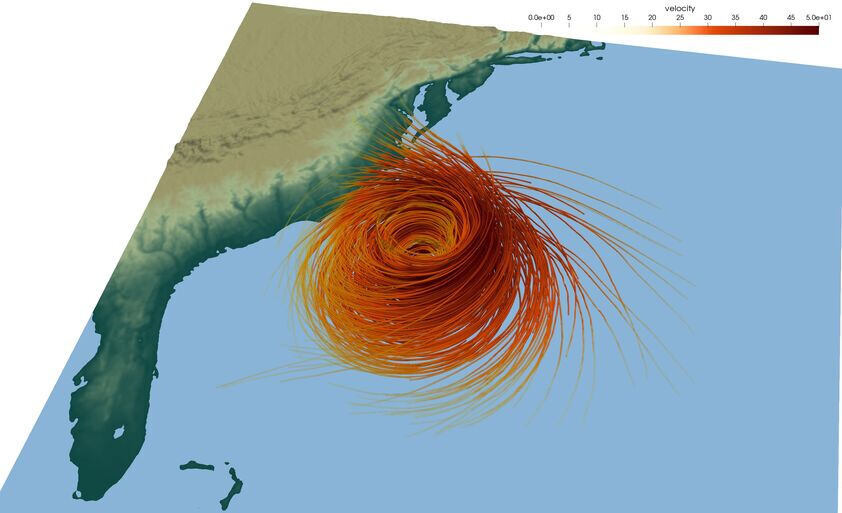 Copyright: © privat Flow lines allow the intuitive visualization of flow data. Pictures is the simulation of hurricane Isabel, which made landfall on the US East Coast in September 2003.

What are you currently researching and in what context is your research important?

One key research focus of our working group is the visualization of large amounts of data, as generated, for example, in complex, extensive simulations running on high- and highest-performance computers. These computers are so fast by now and generate data so quickly that the near real-time analysis increasingly becomes a bottleneck for simulation-based research. With our activities we contribute to making it easier for researchers in the most different disciplines to understand their data. As to my research activities, I am currently concerned with the visualization of vector fields. Such fields describe, for example, the flow of an air-fuel mixture within a combustion engine or the flow of blood through an artificial blood pump. The field lines of magnetic fields also represent a vector field, and they as well can be visualized with the help of particle tracks.

What led you to pursue your stay at the University of Oregon in the US?

My host Hank Childs is an internationally recognized expert in the visualization of very large amounts of data. He is the author and architect of VisIt software, one of the leading tools in this area. We already knew each other for some time before my stay and had discussed our technical ideas during many different conferences. Since both our interests as well as our approaches complement each other, we had thought about how we could develop these discussions in an active cooperation. The Theodore-von-Kármán Fellowship was a perfect opportunity for me: the application process was straightforward, and all the subsequent steps were simple too. The conditions were just right, which made it easy for me to organize my stay.


What exactly did you do during your research stay and what were your most important findings?

The work in Oregon was surprisingly varied. The focus of my visit was a concrete algorithmic problem in visualization: calculating integral lines in vector fields. These lines describe tracks of particles that move in vector fields. In simple terms, wind tunnel experiments can be virtually recreated using these tracks, which helps researchers understand their stored data. Further statistical analyses are also possible based on this technique. The efficient, parallel computation of many particle tracks is a fundamental component of most visualization techniques for vector fields and is therefore – even beyond the purely algorithmic perspective – of particular practical interest. These results are incorporated in various research projects, from the investigation of combustion processes to brain research, and our specific findings were published in a joint paper.

During my stay there was also a so-called VTK-m Code Sprint, involving a team of around 20 core developers. VTK-m is a programming library that provides the components for parallel visualization algorithms. It is being developed by several teams at national laboratories and universities in the US. The event gave me the opportunity to get to know the developers in charge in person and even start working with them in a very short period of time. In addition, I received a compact introduction to VTK-m first-hand, which meant it was a great experience, even in just this respect. 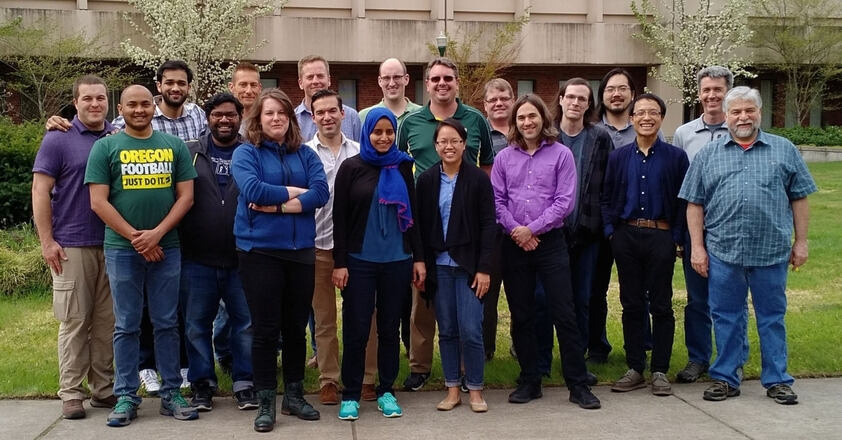 Copyright: © Private Copyright: private group photo of the developers involved in the VTK-m Code Sprint in April 2017 at the University of Oregon with Professor Hank Childs on the back row, 6th from right and Dr. Bernd Hentschel 4th from left.

What are your plans for further collaborations?

Hank and I both found the stay to be very fruitful and have been gradually developing our cooperation since then. The Dagstuhl Seminar is the first concrete outcome of the stay. Our findings on particle tracking have now been accepted for publication. I spent another week in Oregon following a conference in October and Hank is planning on spending part of his upcoming research-free semester in our group. As for me, my next visit is planned for May 2018. We are also thinking about establishing further connections between the groups through a doctoral student exchange. In addition, a project cooperation is being planned, implicating Aachen in VTK-m’s development, for example.

How was the cooperation with your colleagues or students there?

I can sum up what it was like working in Hank’s team in two words: open and straightforward. I was very surprised at how quickly I settled in. I was warmly welcomed there and could get on board with the work quickly and make a contribution.

I really felt that I was part of the team. Students of various different nationalities, backgrounds, and experience levels – Bachelor, Master or doctoral candidates – all work closely together. A lively culture of exchanging ideas is strongly emphasized, members discuss their ideas as equals, and the whole team celebrates successes together. In addition, formal processes are kept to a bare minimum. Concrete cooperations occur ad hoc, whenever and wherever they are required for the task at hand. The whole atmosphere simply "breathes" creativity and this is reflected in the many fruitful ideas that ultimately make the team so successful.

Can you name a particular highlight, experience, or moment of the stay that has stuck with you?

It is a hard task to choose just one moment from my very eventful stay in April 2017. Interestingly, when I returned to Oregon in October, it felt like I had not been away at all. My colleagues greeted me in the hallway, I got "my" office as if it was a matter of course, and within half an hour, I had everything I needed to resume our work together. The stay was just as productive – even though my time was limited to just the one week on this occasion. And that is why I would like to express my thanks for the support I received from the Theodore-von-Kármán Fellowship. I was able to pursue my stay thanks to this funding and it was an incredible experience for me – both personally and professionally. Hank and I agree that we have sowed the seeds for a cooperation that will last for a long time to come. Once again, I would like to express my thanks for this opportunity.

Dr Hentschel, thank you for the interview!