You Are Here: The Quest for an Active and Stable Surface

The Quest for an Active and Stable Surface

Dr. Christoph Bäumer conducts research on water electrolysis. Now he has received a Marie Curie Fellowship from the European Union. 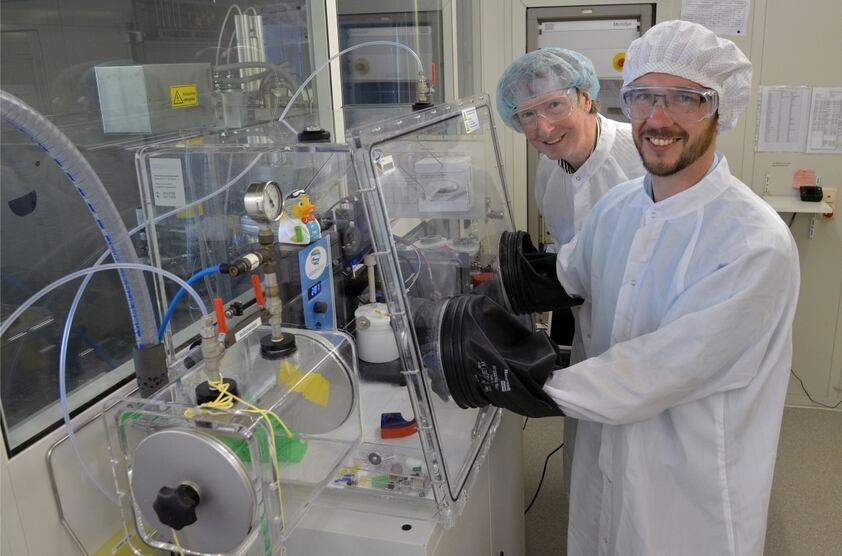 The idea to generate hydrogen with the help of electrolysis is more than 200 years old. The idea to use hydrogen generation for the purpose of energy storage and thus to contribute to the energy transition is also not new. But there is a reason why splitting water into hydrogen and oxygen has not yet played a major part in the energy transition as yet: Electrolysis is itself energy intensive, and the materials which are used in the production of conventional electrodes are expensive. Platinum and iridium, for example, belong to the most expensive materials worldwide.

Today, there are approaches using other materials, and first trials are being conducted using oxid forms of iron and nickel. One of such approaches is followed by Dr. Christoph Bäumer from the Department of Materials in Electrical Engineering II at RWTH Aachen University. In his research project, he builds on the understanding – and modification – of catalyst surfaces: that’s where the decisive reaction for the generation of hydrogen takes place. “But it has not been sufficiently defined as yet,” says Bäumer.

Now there are high hopes that cost-efficient and efficient catalysts from materials that are widely available can be developed. For this reason, Christoph Bäumer will now receive an Individual Global Fellowship within the Marie Skłodowska Curie Action program. As a Marie Curie fellow, he will conduct initial experiments at both his home department, led by Professor Rainer Waser, and at the Department for Material Science and Engineering at Stanford University, where he will be part of Professor William Chueh’s group.

In addition, he will contribute to the research activities at the Peter Grünberg Institute for Electronic Materials led by Professor Regina Dittmann, which is concerned with the development of new materials. Here, Bäumer will investigate atomically defined catalyst layers during the electrolysis process. “We want to understand how to develop a material which is both active and stable. So far, we had to choose between the one and the other.”

Since 2008, RWTH has acquired 12 Marie Curie Fellowships: seven within the 7th EU Research Framework Program and five within the current Horizon 2020 program – that is, three Global and two European Fellowships. Bäumer's is one of 71 proposals to receive funding; the evaluation result of 96.4 percent is outstanding. “For a young researcher, a grant like this offers great opportunities. It provides security, and I can benefit from the best of the three research worlds in which I am active,” says Bäumer. The total funding volume is 214,000 euros.

Bäumer has been investigating atomically defined oxide surfaces for many years. In his doctoral thesis, for which he conducted research at both RWTH and Forschungszentrum Jülich, he examined their application for the purpose of data storage – as computer components, the next generation of hard drives, so to speak. For his contributions to the topic, Professor Rainer Waser had received the Leibniz Award. In both areas of application – the generation of hydrogen through electrolysis and the development of data storage technologies – the focus is on similar processes: so-called valence changes or state transitions of materials. As Rainer Waser explains, “Research on such microscopic mechanisms is absolutely fundamental, but also opens up – in this case two – application-oriented perspectives.”

The first experiments are now under way in the Aachen institute’s clean room. Christoph Bäumer will spend a lot of time in the research labs in Aachen, Stanford, and Jülich, seeking to achieve his central research goal: “I want to build a more fundamental understanding of the processes of splitting water.” Based on his insights, it may become possible to adjust the composition of the material in such a way that it remains as active and stable as possible, thus making hydrogen a decisive factor in the transition to renewable energy.