Results of the GALILEOnautic research project were recently presented at the Rostock Port. Individuals from RWTH Aachen; the University of Rostock; Wismar University of Applied Sciences; and SCISYS Deutschland GmbH, an IT company, have developed automated systems for maritime applications. The project was funded with 1.6 million euros by the Federal Ministry for Economic Affairs and Energy, BMWi.

Project representatives were able to demonstrate how safe traffic flow can be ensured through increasing automatization in navigation as martime traffic in harbors consistently increases. Technologies were developed to allow cooperating ships to autonomously navigate and better maneuver in harbors. The presentation of current technical developments represents the autonomous, collaborative efforts made by those active in ship navigation, who work together in a voting network. 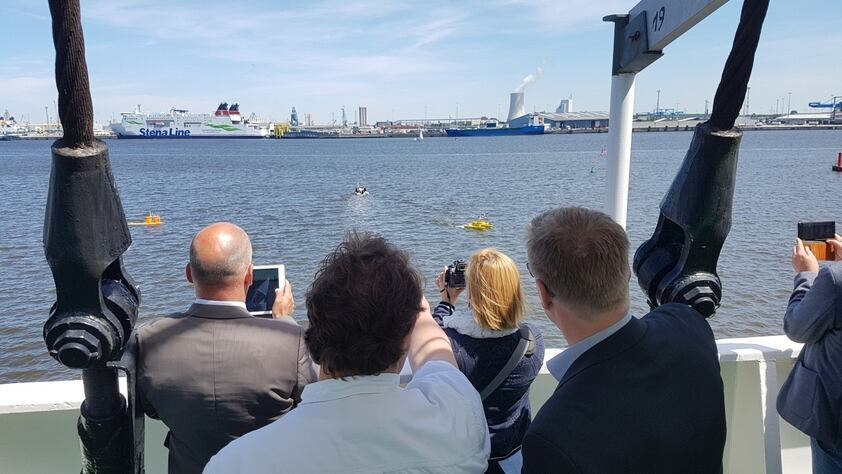 Copyright: © Hochschule Wismar/Kerstin Baldauf The attendees of the GALILEOnautic closing presentation watched the live demonstration on Unterwarnow across from the Rostock harbor with great interest.

A basic prerequisite to this autonomous behavior is the highly precise and reliable position determination and navigation. This is achieved by communicating with the new European satellite navigation system "Galileo." Current information could be calculated on the vessels' position, speed, and orientation, which is then used to predict how the vessels will move in the next seconds and minutes. This knowledge makes it possible to make suggestions on how the vessels should best move, for example in a harbor, with and among each other. The further development of existing maneuver assistance systems is also required to make optimal suggestions. Additionally, ship control systems on board were created that are robust and can face changing environmental conditions and influences. Secure and permanently available communication paths were created to transfer data among all vessels. A combination of different sensors were used for proximity recognition in the area.

The requirements for an autonomous operation include an exact and reliable determination of the position, speed, and orientation of a vessel. "A particularly unique characteristic of GALILEOnautic is the intercommunication and central coordination of all maritime vehicles involved," explains project coordinator Dr. René Zweigel from the RWTH Institute of Automatic Control. "As a result, it is possible to implement automatization among mixed traffic with autonomous and non-autonomous systems. This is the only way automatization can succeed step by step." 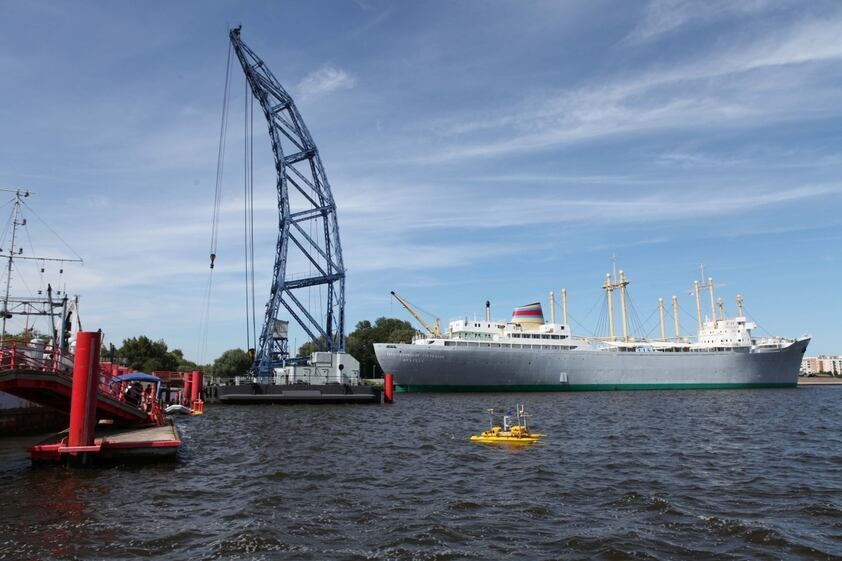 Copyright: © Hochschule Wismar/Kerstin Baldauf Participants on the traditional ship could follow the live demonstrations on the Unterwarnow across from the seaport - here the autonomous catamaran heads off.

Professor Bodo Wiegand-Hoffmeister, rector of Wismar University of Applied Sciences, emphasized the importance of the close collaboration between science, industry, and politics, "The Rostock surroundings and harbor, the excellent infrastructure, and close proximity to the University of Rostock and Wismar University of Applied Sciences allow future steps towards autonomous navigation. We want to be forerunners in the field." He adds: "The research infrastructure available in Rostock offers ideal conditions for developing the technical requirements together with all the partners."

The presentation was held on the traditional ship "Typ Frieden" at the Shipbuilding and Seafaring Museum at IGA Park Rostock. The potential of the developed system was demonstrated in different test scenarios with autonomous water vessels nearby on the Unterwarnow across from the seaport. Two ships were linked and cooperated with each other. A third inflatable dinghy that was neither connected nor manned disrupted the ships. They autonomously avoided both each other and the dinghy while still adhering to the collision prevention regulations and their final destination. In a second scenario, the potential of a proximity recognition system was demonstrated which could exactly locate a pier as the unmanned vessels simultaneously sailed by.

The third scenario took place in the Maritime Simuluation Centre Warnemünde, MSCW, at the Department of Maritime Studies at Wismar University of Applied Sciences. Here, the cooperation of vessels connected with each other in safety-critical areas was simulated: Two ships each measuring 200 meters come upon each other in a channel leading to the Rostock harbor. The simulation demonstrated how the ships could avoid each other in the narrow fairway while adhering to national collision protection regulations. "The rapid development in this field will include further maritime transport carriers," adds Professor Torsten Jeinsch from the Institute of Automation Technology at the University of Rostock.