RWTH Professor Hans-Joachim Jürgens has been awarded a prize by the Deutsche Lesepreis Foundation in the  category of „Herausragende Leseförderung mit digitalen Medien“ for his efforts to promote reading with the help of digital media. His internet whodunnit puzzles for children about the "Schlossplatzbande" came in at second place. The Deutsche Lesepreis has been awarded by the Stiftung Lesen and the Commerzbank Foundation in six categories since 2013. 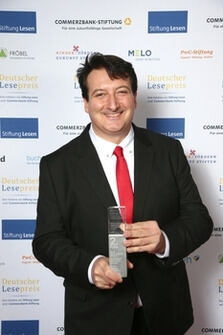 Jürgens has been in charge of the German Language Pedagogy Teaching and Research Area since November 2018. The website to promote reading with interactively solvable whodunnits came into being while he was working with students at his former position at the German Language Institute at the Unversity of Münster.

At the core of the stories are the children Nette, Jo, Ferrit and Lara, as well as dog Dosty and chimp Chico. The readers first follow along with their adventures and then get to solve the mystery and figure out who the culprits were. The texts are fashioned in varying lengths and degrees of complexity; thus there are "cases for beginners," "cases for detectives in training," as well as "cases for master detectives." Mentor of the project is Oliver Korittke, known as Ekki from the ZDF-TV show Wilsberg, which is also set in Münster. Reading exercises with Münster sport stars, recommended reads, as well as teaching materials for fourth and fifth grade complete the offerings.

Jürgens initially completed his Master's studies in German Literary Science and History at Leibniz University Hannover. Afterwards he studied Secondary School teaching (Gymnasium) with a subject combination of German and History, also in Hanover. He completed his doctoral studies in Hanover with a Dr. phil degree in 2003 and, in 2012, he gained the qualification of Dr. paed. at Karlsruhe University of Education. After career stops at Gottfried Wilhelm Leibniz University Hannover, Karlsruhe University of Education, Carl von Ossietzky University Oldenburg and Wilhelms-University Münster he was appointed professor for German Language Pedagogy (literary pedagogy) at RWTH Aachen University.