You Are Here: Sandra Venghaus and Till Tiso Honored With the 2022 Christian Patermann Award 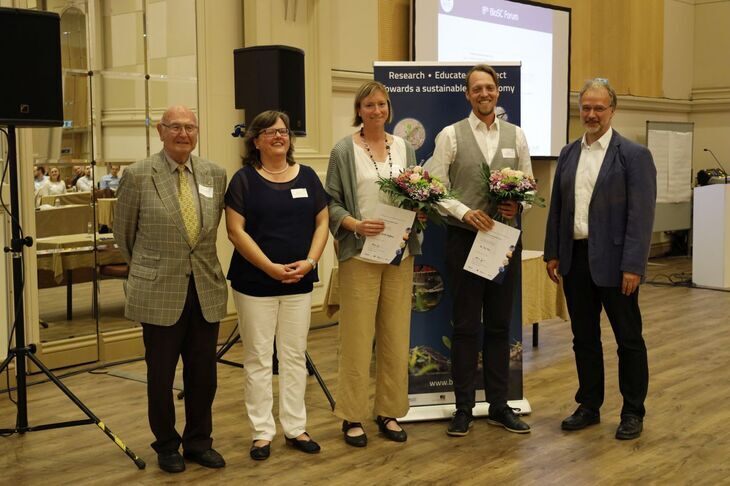 The Bioeconomy Science Center has conferred the Supervision Award to early-career researchers among its members for their outstanding achievements in supervising doctoral students since 2014. In 2021, the prize, which is endowed with 25,000 euros, was renamed to Christian Patermann Award, and it now honors the founder of the knowledge-based bioeconomy in Europe. On May 11, the eminent lawyer himself presented this year's prize, which is shared by Professor Sandra Venghaus (RWTH Aachen University/Forschungszentrum Jülich) and Dr. Till Tiso (RWTH Aachen University).

Sandra Venghaus studied Environmental Science and Public Policy at Harvard University and was a DFG fellow in the Interdisciplinary Environmental History Research Training Group at the University of Göttingen before earning her doctorate at the University of Hannover’s Institute of Marketing and Management in 2011. Further stations in her scientific career were the Potsdam Institute for Climate Research, the University of Bielefeld, and the Institute for Energy and Climate Research at Forschungszentrum Jülich, where she became a group leader in the area of Systems Research and Technological Development in 2014. In 2021, she was appointed assistant professor for Decision Analysis and Socio-economic Evaluation at RWTH Aachen University.

Till Tiso completed his studies in bioprocess engineering at the University of Dortmund. Then, from 2011 to 2016, he was a doctoral candidate at the Institute of Applied Microbiology (IAMB) at RWTH Aachen University. During this time, he also completed research stays at Imperial College London and CSIC Madrid and was involved in international research collaborations with partners in Canada, Brazil, and South Korea, for example. After earning his doctorate, he became a group leader at IAMB in 2016. His research interests include synthetic biology, metabolic engineering, and recombinant production of secondary metabolites in various microorganisms.

Both award winners were nominated by doctoral students and by the heads of their institutes. Professor Ingar Janzik frequently quoted from the personal letters of support in her laudation. The letters for Sandra Venghaus pointed to the composition of her team, with doctoral students from economics, political science, engineering, and mathematics. According to the writers, this composition reflects the interdisciplinary approach needed for researching the best way forward for the social transformation to a sustainable bioeconomy. This approach is further complemented by the collaborations with international partners, helping the team to overcome disciplinary boundaries and think in a global context. The letters of support for Till Tiso acknowledged his close cooperation with external partners from academia and industry in all the doctoral projects. According to the writers, such an approach is to be applauded because it leads doctoral candidates to work with experts from completely different fields – from process engineering to ecotoxicology and structural biology to social and economic sciences. He is also appreciated for supporting doctoral candidates in participating in interdisciplinary conferences, workshops, and summer schools.

Dr. Dr. h.c. Christian Patermann personally presented the award at this year's BioSC Forum. Christian Patermann was Head of the Research Directorate at the European Commission from 1996 to 2007 and was in charge of the concept of a “Knowledge-based Bioeconomy (KBBE),” which the Commission first formulated in 2005. From fall 2007 to 2014, he advised the North Rhine-Westphalian state government on the emerging future field of bioeconomy. From 2009 to 2012, he was a member of the first German Bioeconomy Council. He is the most important pioneer for the modern knowledge-based bioeconomy in Europe.