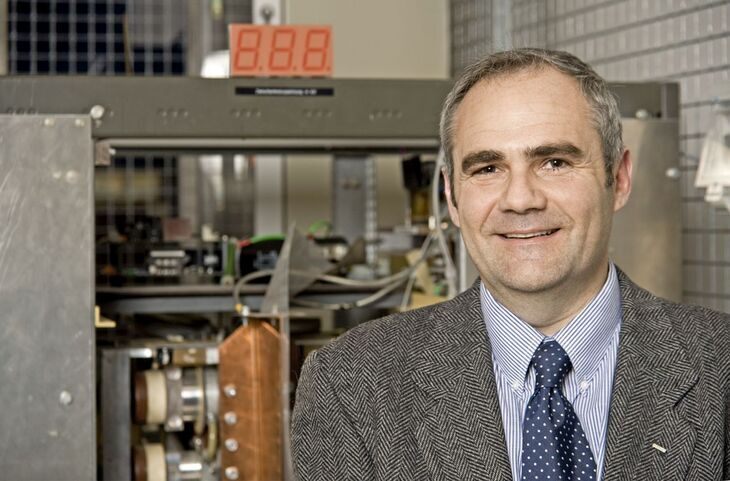 Professor Antonello Monti is considered a pioneer in the development of real-time simulations and so-called hardware-in-the-loop testing for the digitalization of power systems.

On May 23, 2022, the holder of the Chair of Automation of Complex Power Systems at RWTH Aachen University was awarded with the Innovation Prize of the Federal State of North Rhine-Westphalia in the "Innovation" category, worth100,000 euros. The prize is the second most valuable award of its kind in Germany after the Deutscher Zukunftspreis presented by the Federal President.

With the award, the federal state recognizes excellent research that is socially relevant, scientifically significant, and provides opportunities for real-world application. Yesterday, the Minister President of North-Rhine Westphalia, Hendrik Wüst, and the NRW Minister for Economic Affairs, Innovation, Digitalization and Energy, Professor Andreas Pinkwart, presented the award to Antonello Monti at a ceremony in Düsseldorf.

“Business and society have set themselves ambitious goals: By 2045, we want to have a climate-neutral economy in North Rhine-Westphalia," says Pinkwart. “To ensure that this transformation succeeds, we are shifting towards a more sustainable energy supply based on renewables. This poses huge challenges for electricity distribution networks. Professor Monti and his team have developed a platform to make better use of the capacities of existing grids thus supporting the expansion of renewable energy sources. Such innovative solutions facilitate Germany’s energy transition and boost acceptance among citizens.”

Monti and his team are developing a concept for the automation of modern power networks. In the past, automation solutions were implemented as monolithic products by a single company. “My group has developed a new concept based on modern IT solutions that enables a modular approach. Our concept was developed as open source to encourage collaboration between all stakeholders and to ensure the creation of an open ecosystem,” explains Monti.

Electrical distribution grids are at the heart of the energy transition, as most renewables are fed into low and medium voltage grids. The changing role of distribution grids requires novel solutions for orchestrating the various grid elements. It is also key to develop digitalization solutions for distribution grids, paving the way for new market players and service offerings. This is where Professor Monti's research comes in. As part of SOGNO, a Horizon 2020 research project funded by the European Commission, the Institute for Automation of Complex Power Systems (ACS) has developed an innovative software platform to keep pace with today’s changing requirements.

Customer Participation and a Fairer Market

The SOGNO platform uses concepts and methods from the Internet of Things and adopts a micro-services based approach. The use of micro services makes it possible to implement a modular software architecture in which automation functions are realized as individual, independent service packages. Recently, the platform was selected by the Linux Foundation Energy to implement a worldwide project.

“The platform aims to create the conditions for a higher penetration of renewable energy sources by optimizing the use of existing infrastructures, also to avoid excessive investment in new power lines. In addition, SOGNO enables customer participation in grid management through flexibility mechanisms, creating the conditions for a fairer energy market,” explains Monti.

Antonello Monti has been a professor at RWTH since 2008. Before joining RWTH, he conducted research at the University of South Carolina, USA, and worked as an assistant professor at Politecnico di Milano in Italy, his home country. In 2020, he was appointed coordinator of the OneNet Horizon 2020 project, the largest research project funded by the European Commission in the area of electrical grids. He is coordinating 72 partners across Europe, managing a budget of about €30 million. He was the first European to receive the IEEE Field Medal Award for Innovation in Public Infrastructures.

A pioneer in the digitalization of power systems: Professor Antonello Monti, Chair of Automation of Complex Power Systems at RWTH Aachen University.