You Are Here: Reforestation in the Sieben Quellen Park Area After Storm Damage

Reforestation in the Sieben Quellen Park Area After Storm Damage 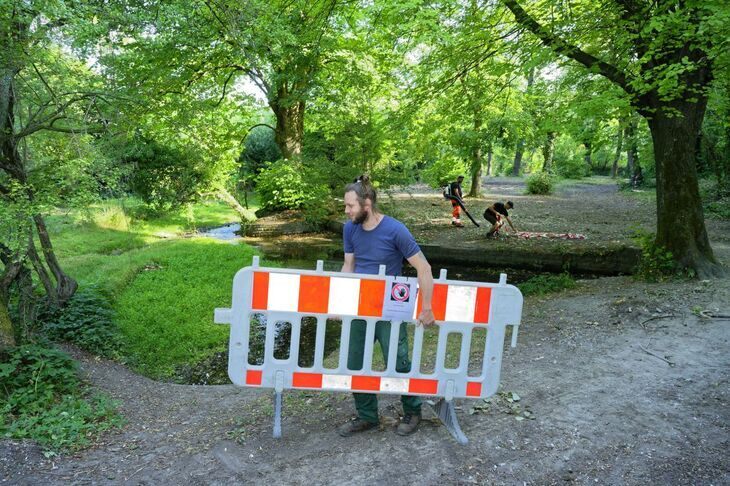 Local officials are asking the general public to understand that protective measures have had to be taken and are calling on everyone to act responsibly and with consideration when visiting the natural monument in Western Aachen.

On June 24, a localized thunderstorm hit the Aachen city region and caused some serious problems. It levered two of the four giant poplars out of the bank of the Dorbach creek in the Seffent district of Aachen, which also damaged other trees.

This idyllic setting with the two unique, bowl-shaped springs – called Quelltöpfe in German – of the so-called Sieben Quellen (Seven Springs) area is a declared natural monument many local citizens like to visit. The area is owned by Bau- und Liegenschaftsbetrieb NRW but is managed by RWTH Aachen University. The University must, therefore, also ensure the operational safety of the property. An ancient tree population on the grounds provides a refuge for numerous rare species of animals. However, public safety is also paramount, and the locality must be kept free of hazards. Therefore, the two remaining poplars and some ash trees were checked for their stability with the involvement of the lower landscape authority in Aachen.

Unfortunately, it turned out that five decayed trees had to be cut down, and five others needed maintenance pruning. To carry out these tasks, access to the area had to be restricted from the end of June. Before the tree work could even be started, two woodpecker families had to move out of the trees first. Normally, according to the German Federal Nature Conservation Act, such felling may only be carried out after October. However, a property owner’s legal duty to maintain the safety of their premises and grounds requires that hazards be minimized. Now, after the most urgent work has been completed, the popular area has been opened to the public again

However, further measures are planned. The parcel belongs to the nearby forest on the crest of Wilkensberg Hill. Since Sieben Quellen is also designated a forest parcel, the Forestry Department has issued a request for reforestation, which must be carried out by the spring of next year. This reforestation project must be protected from external damage, which is why there will be some fenced-in areas over the next ten years to protect the young saplings. Those in charge of outdoor maintenance at RWTH hope that nature-loving citizens will be understanding of these measures. They also ask people to remember that Sieben Quellen is a valuable habitat that should not be used as an adventure playground. If we all heed this advice, future generations will also still be able to visit the still publicly accessible springs.

The barrier that was erected as a protective measure in the area of Sieben Quellen in Seffent could be taken down today: the natural monument is now open to the public again.