You Are Here: Intelligent Bioelectronics for the Skin and the Brain

Intelligent Bioelectronics for the Skin and the Brain 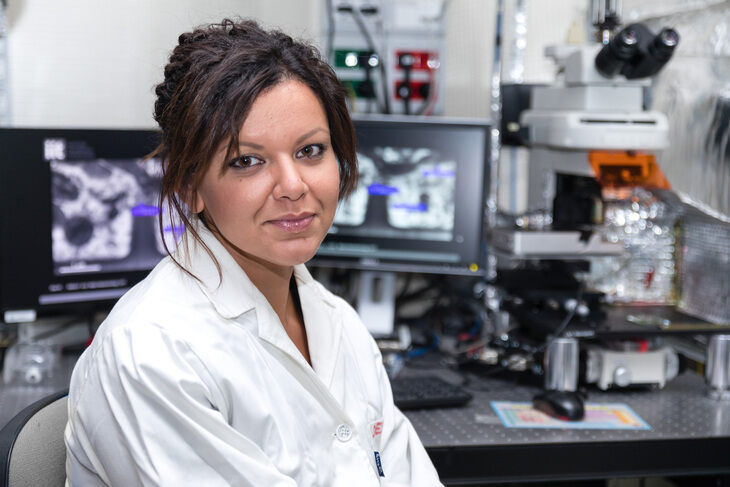 Professor Francesca Santoro will receive this year's Early Career Award from the Leopoldina National Academy of Sciences. The materials scientist and biomedical engineer has been conducting research and teaching at the Faculty of Electrical Engineering and Information Technology at RWTH Aachen University and the Jülich Institute for Bioelectronics since 2022.

With the award, the Leopoldina recognizes both Santoro's research contributions in the field of bioelectronics and her work on the development of new materials that can accelerate the healing process through electrotherapy of skin and nerve tissue. The prize, endowed by the Commerzbank Foundation and worth 30,000 euros, will be awarded at the Leopoldina Annual Assembly on Friday, September 23, 2022, in Halle (Saale).

Francesca Santoro develops bioelectronic materials and researches their interaction with living cells. In her doctoral thesis, which she did at Forschungszentrum Jülich, she began studying the electrical activity of cardiac muscle and nerve cells, explored techniques for fabricating micro- and nanoscale 3D structures, and received her PhD from RWTH in 2014. In fall 2014, she joined Prof. Bianxiao Cui's group at Stanford University, where she studied the interaction of cells with nanostructured materials.

In 2017, she returned to Naples to head a junior research group at the Istituto Italiano di Tecnologia there. Building on work from her time at Stanford, she developed a material capable of electrically stimulating injured skin cells to improve the healing of damaged tissue. The ultra-thin and skin-friendly electronic materials have photovoltaic properties, meaning they capture solar energy and do not require a battery. These wound dressings or patches can remain on the skin for weeks. The three-dimensional nanostructure improves the interaction between electrodes and cells, so Santoro's concept can also be applied to nerve cells.

The researcher is currently working on optimizing the interfaces between nerve tissue and electronic microchips. In the process, she has succeeded in producing a so-called biohybrid synapse that can release the neurotransmitter dopamine - a messenger substance that plays an important role in the treatment of Parkinson's disease, among other things. In the future, such biomaterials could be implanted in damaged nerve tissue, for example, and used to successfully treat neurodegenerative diseases.

Francesca Santoro has already been awarded numerous grants and prizes for her research. She received an ERC Starting Grant from the European Research Council and was the 2021 recipient of the Falling Walls Science Breakthrough of the Year in Engineering and Technology. In 2018, she was named one of the winners of MIT Technology Review's annual Innovators Under 35 Europe Awards.

This year, Francesca Santoro received another honor: participation in an "Interstellar Initiative Mentoring Workshop" that will last until February 2023. The "Interstellar Initiative" was created by two of the most important international scientific associations - the New York Academy of Sciences and the Japan Agency for Medical Research and Development. The goal of the initiative is to support the world's most promising young scientists in the fields of cancer research, regenerative medicine and neuroscience.