You Are Here: Spider Silk for Wound Healing

Spiders spin a lot and their silk is extremely sturdy.  In relation to the diameter of its threads, a spider web is five times stronger than steel.  To describe the thread’s resilience, biochemist Artem Davidenko, from the DWI at RWTH, says, “A thread with a diameter of 2 centimeters could pull a whole airplane.”  Davidenko has worked for three years on a project aimed at creating an effective use of spider silk. 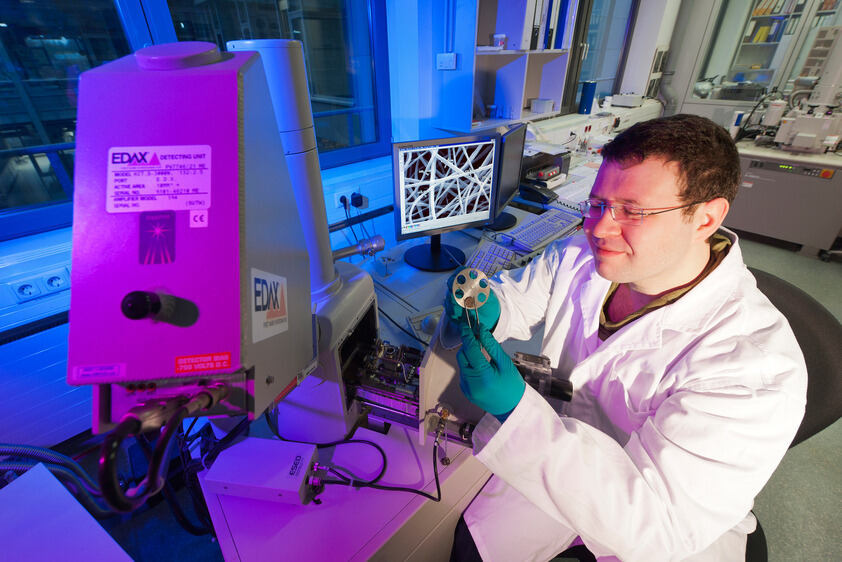 Copyright: © Photo: Peter Winandy Caption: Spiders are the focus of a research project on aiding in wound healing at the DWI of RWTH.

In addition to the mechanics of the material, he, Prof. Doris Klee, the project head and Vice-Rector for Human Resources Management and Development, and Prof. Martin Möller, Scientific Director of the DWI, are interested in how the material aids in wound healing. Even the Romans covered a wound with silk to decrease the number of days it took to heal.

Spider silk consists of proteins, which are generally made up 20 building blocks, the so-called amino acids. Amino acid chains are, among other things, the foundation for enzymes. Proteins regulate most biochemical reactions – from digestion to muscle movement to cell repair processes. Amino acid chains are also in antibodies and hormones. Structural proteins are a particular class of proteins that help in cell and tissue construction, thanks to their elongated shape. Davidenko illustrates: “They are, for example, the keratin fibers in hair, the actin in muscles, or the collagen in skin cells.”

“Worldwide, there are 40,000 types of spiders, but it is tedious to commercially produce silk using natural methods. This is due to the cannibalism in most types of spiders. The female sometimes eats the male after mating,” explained the researcher. For this reason, the structural proteins in the spider silk have to be made artificially. At RWTH, work is concentrated on what the silk is made up of. A spider is capable of producing seven different types of silk for various uses: from the cocoon on the outside to glue on the inside. “The proteins at the end of the web are particularly intriguing for our project,” says Davidenko. The supporting structure is not sticky, is much firmer than the inside components, and is distinguished through its high stability and elasticity. It stretches well without tearing.

Spider silk proteins are disassembled by enzymes. It’s an ideal condition for using such proteins as wound coverage. For the biotechnical production of spider silk, genes have to be modified and proteins unified. The adapted genes are placed into host bacteria. The bacteria then synthesize the protein. “The particular challenge is not to overstrain the bacteria, since its capacity is limited to 5,000 DNA bases, which outline the genetic material for protein synthesis. If this boundary is exceeded, it could lead to errors,” emphasized Davidenko. The protein can be implemented, if it “disintegrates” in the wound. The body’s own enzymes help in this. Investigations into solubility, degradability, and the release of the spider silk proteins show promising results: natural wound fluid can break down the generated proteins and aid the wound healing. Researchers at DWI are now developing a bandage that has spider silk proteins attached to the side touching the skin.