You Are Here: RWTH Professor Christa Reicher Honored for Her Lifework 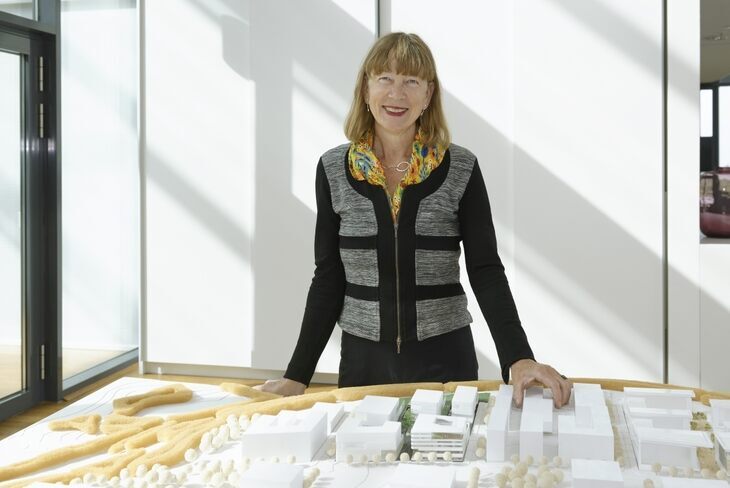 RWTH Professor Christa Reicher, Chair of Urban Design, was honored with the Grand Prize for Building Culture by the Association of German Associations of Architects and Engineers (DAI) during the DAI Day, held in Münster. This prize has been presented every two years since 1990 in recognition of special services to building culture in Germany and is the most important honor of its kind, always honoring the individual's lifework.

Reicher studied architecture at RWTH and ETH Zurich. She worked in international planning offices, founded an architecture firm, and taught at the Frankfurt University of Applied Sciences, Bochum University of Applied Sciences, and TU Dortmund University. In winter semester 2018/19, she took over the RWTH chair and the direction of the Institute for Urban Design and European Urbanism. In 2019, she received the Innovation Award of the Real Estate Industry for her commitment to the Ruhr region; the professor is also chair of Revierknoten Raum, an interdisciplinary team of planners and architects that combines the competences of spatial planning, urban planning, and architecture and focuses on the spatial development of the Rhenish mining area. Together with her team, Reicher has won numerous international planning competitions, such as for Campus Melaten in Aachen, at the Urban Tech Republic for Berlin Tegel Airport, and recently the urban planning procedure for the site of the former Berlin Schönefeld-Nord Airport.

In her laudatory speech, Professor Iris Reuther, Senate Building Director of the Free Hanseatic City of Bremen, praised the Aachen-based architect and urban planner as a "university professor with heart and soul." Her role as a thought leader for integration and interdisciplinarity, her appreciation and international recognition as an "excellent urban researcher and publicist" and, last but not least, her image in her field as a leader in building and planning culture also justified the prize. Arnold Ernst, President of the DAI, presented the bronze cube symbolizing the prize.

Professor Christa Reicher, RWTH Chair of Urban Design, was honored with the Grand Prize for Building Culture of the Association of German Architects and Engineers (DAI).