You Are Here: RWTH Honorary Doctorate Awarded to Armin Maiwald 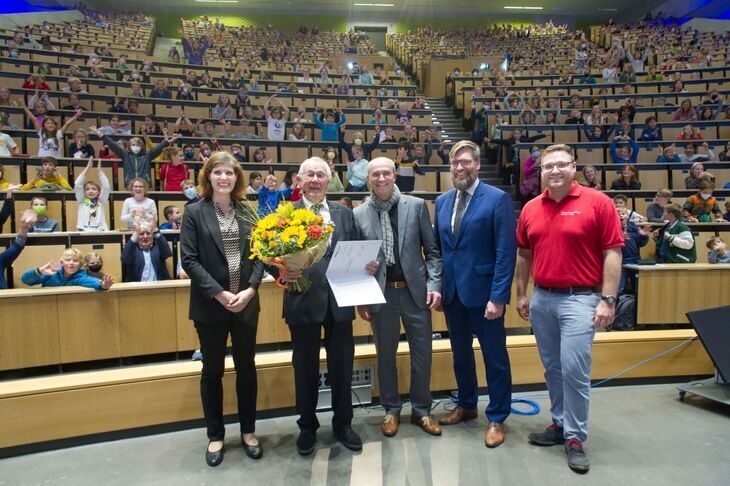 With his "Sachgeschichten" (factual stories), Armin Maiwald has brought science and technology closer to generations of children. The 82-year-old is cofounder, producer, and longtime stakeholder and actor of the popular children’s television series "Die Sendung mit der Maus". By resolution of the Senate of RWTH Aachen University, he has now been awarded the honorary doctoral degree of Engineering Sciences Honoris Causa, presented by Senate Chair Professor Kai-Uwe Schröder.

"Week after week, Maiwald and his team awaken the spirit of research in children - as well as in the siblings, parents, and grandparents who also regularly tune in with them. Even though it may not be possible to draw a clear line from the first factual story seen as a child to later enrolling at university as a young adult, young scientists undoubtedly remember the special broadcast format," explained Carsten Schiffer, representative of the mechanical engineering student council on the Faculty Council of the RWTH Faculty of Mechanical Engineering in his laudatory speech.

The student council, representing the students of mechanical engineering, made the request for the award of this honorary doctorate to the Senate, which gladly complied. "May Armin Maiwald be a shining example for us to maintain our own curiosity and drive to research throughout our lives and to always want to pass these on to the next generation of academics," Schiffer continued. "We ourselves have already asked RWTH for help with various complicated questions, and they have also helped us in an outstanding way each time. In this respect, it is a special honor for me – actually always as someone seeking help – to be honored in this way. After all, RWTH is not just any university; it is one of the best institutions in the country. I would like to thank the University very much for the award," Maiwald replied.

Rector Professor Ulrich Rüdiger emphasized the outstanding educational level of the factual stories and how entire families thoroughly enjoy watching them. "Armin Maiwald prepares complex situations for children of pre-school and primary school age. He manages to choose age-appropriate simplifications and representations without distorting the interrelationships beyond measure. In this way, he reaches not only children but also their families – he thus has an impact on society as a whole."

Maiwald was born in Cologne in 1940. While still studying theater, German, and philosophy at the University of Cologne, he worked as a stagehand, cable helper, and sound and camera assistant, before becoming assistant director for the afternoon television program of local channel WDR in 1963. Two years later, he independently directed a show, “René Gardi”, for the first time.

In 1972, Maiwald founded "FLASH Filmproduktion" in Cologne, which still produces the film segments for "Die Sendung mit der Maus". Since the end of the 1970s, Maiwald has also appeared regularly in these funny and factual stories.

He was awarded the Federal Cross of Merit in 1995 and the Cross of Merit of the State of North Rhine-Westphalia in 2019, among other honors, in recognition of his work.