You Are Here: 2015 Distinguished RWTH Fellows 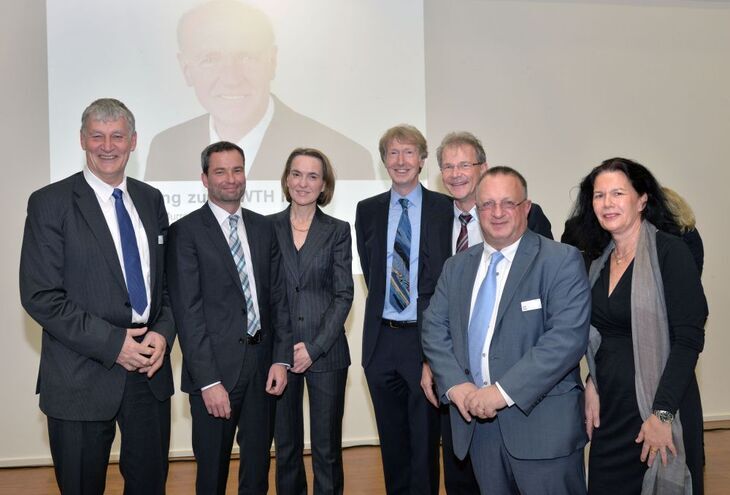 The speaker at this year's Melaten Talks was the president of the German Academic Exchange Service, DAAD, Professor Margret Wintermantel, who spoke about the "Strategies of Universities' Internationalization – Expectations and Challenges."

"Professor Abel's extraordinary research achievements have enabled him to initiate successful fundraising for large research projects in the field of control and automation engineering, particularly the infrastructural project Galileo with follow-up research and development projects for the University. He is receiving the title of RWTH Fellow for his outstanding research performance, his contributions to structural development, and for his involvement in University politics on various committees at our University."

"Professor Murrenhoff has been named RWTH Fellow for his outstanding and innovative scientific research achievements in the field of fluid-technical drive and control engineering. His scientific excellence is particularly demonstrated in his vast amount of research experience and involvement in various collaborative research centers, which has gained recognition at the international level, thus strengthening RWTH Aachen's visibility worldwide. Professor Murrenhoff made significant contributions to academic self-administration as well."

"Professor Schneider has been named RWTH Fellow for his outstanding scientific performance in the field of materials chemistry. Although his scientific life's work cannot yet be considered finished, he has been nominated to his high international visibility, the outstanding quality of his research work, and his efforts for materials research at RWTH Aachen."

"Professor Waser has been a pioneer in the field of materials research, particularly in the field of new construction elements for nanoelectronics. Resistive storage concepts have turned into a big research topic in nanoelectronics. His outstanding scientific achievements, which are documented in numerous renowned publications, are greatly valued nationally and internationally and honored repeatedly through the award of a number of prizes, such as the Lebnis Award in 2014, and the Tsungming Tu Award in 2015. He contributed significantly to the foundation and shaping of JARA and JARA-FIT. We are delighted to name Professor Waser a RWTH Fellow."

Professor Rossaint is director of the Department of Anaesthesiology at the University Hospital Aachen and is receiving the title RWTH Fellow for his outstanding scientific work, which has made him well-known as a researcher far beyond RWTH Aachen. Through his extensive and long-term involvement in University politics, both as vice-rector and as dean of studies in the Faculty of Medicine, Professor Rossaint has substantially and actively contributed to the formation of RWTH Aachen's profile and structural processes."

Professor Kuhl has been director and chair of diagnostic and interventional radiology at the University Hospital Aachen since 2010. Professor Kuhl is one of the top leading researchers worldwide in the field of magnet resonance diagnostics of tumors. She is an oustanding scientist, who is highly valued throughout the world, outstandingly connected, and distinguished with many research prizes, which underline her scientific excellence. We are delighted to name Professor Kuhl a RWTH Fellow."

Head of the Department of Radiology

Chair of Fluid-Technical Drives and Controls

Chair of Materials of Electrical Engineering